A Fun But Challenging Park Marathon 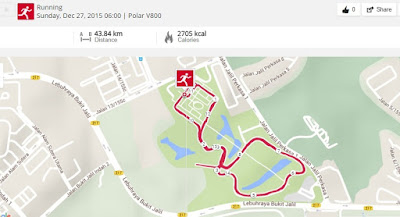 This is what I did today. Running a marathon in loops around the rather hilly Taman Bukit Jalil.

Why did I deviate from my training? I wanted to show support to Park Marathon and the organiser. Sadly though, I was informed that this edition of Park Marathon will be its last. Awwwww...

So I was really glad I made an exception and ran in Park Marathon.

Flag-off was at 6.00am sharp and when everyone had started running, I was still talking to the crew about how I was so not ready to do this. Hahaha 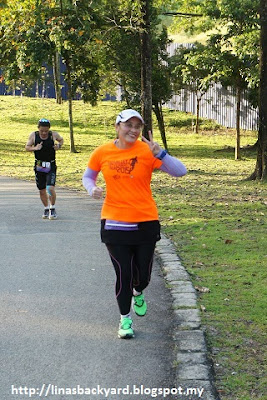 The first 12K was done at a modest target pace.

My goal in this marathon was simple. Prepare to do a positive split (i.e. slower second half time than the first half).

The first 15K was done at 1:57. 2 minutes slower than target. Had to do two stops that was almost 15 minutes and one of them was actually for a No. 2 toilet break. Tummy achy lah. Huhuhu

I already asked hubby for some coins when I bumped into him just a few hundred metres from the toilet but luckily, the organiser had "kowtim" toilet payment for us so runners with bibs could enter the Park's toilet for free. Just like at Back 2 Endurance. 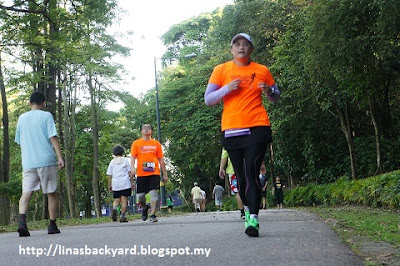 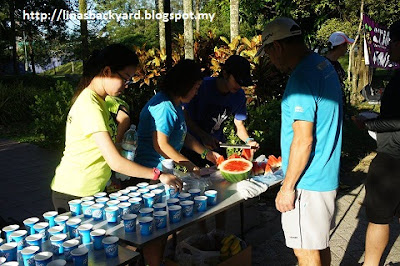 The motivation to finish loops after loops was to get to the water station for me. All the drinks (cold water, isotonic & coke), fruits, biscuits, chips and at one point, aiskrim potong waiting for runners as we were finishing each of our loops.

I spent on the average about 2 minutes after finishing each loop at the water station. 16 loops x 2 min = 32 minutes to eat & drink! But never mind lah. I got to fuel up and talk with friends also.

The crews manning the water station were marvelous. Very cheery and hardworking.

Friends who weren't running came to support us and a family came with candies and chocolates to offer to us, mid-loop and their daughter even made some motivational signs for us. So sweeeeeetttttt. 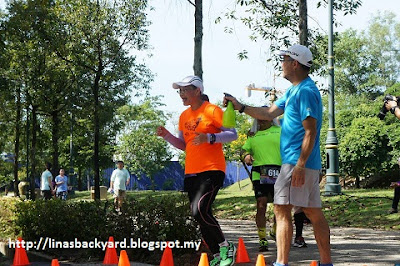 The day was hot and sunny by 9.00am so it was a godsend to receive sprays of water from the crew. So  legaaaaaaa... 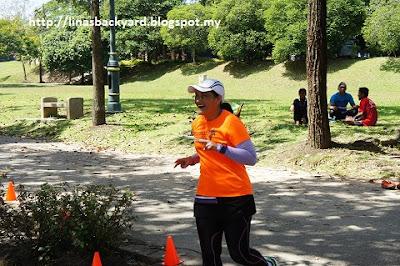 It was rather fun to be running at the park during the early morning when the park was full with visitors. People of all ages came to the park to do some workout and there were a few groups having parties and of course, there were the wedding photography sessions too.

It got rather boring as it got late morning when the park got quieter but thank goodness for fellow runners. Most were friendly and we smiled and encouraged each other. Some however were way too serious running, perhaps they were totally focused on getting a great finishing time.

For me, I was happy I met my 30K target time of 4-hours (it was 4:03 though. hihihi) The final 13K felt really never ending for me, especially as we had to deal with the heat. But I trudged on and finally made the last loop.

And boy, was I ecstatic when I got to the finish line. 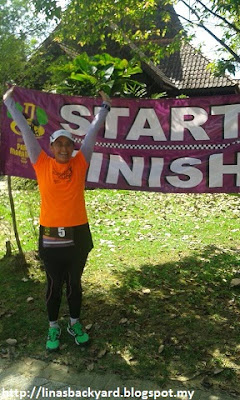 This was my longest run since Sep 2015. With negligible mileage for Oct and with the start of my half-marathon training in November which currently I am following, I had not done anything over 15K in a single run so I was pretty happy with today's run.

I treated this marathon as both my long run (LSD) and hill training session combined.