Two Runs, One Weekend (Sunday At Amnig I Am Warrior Run)

The family had checked-in at e.City Hotel which is located right across from where the Amnig I am Warrior Run will be flagged-off last Sunday.

The hotel stay was a treat for Son's birthday too and have to say, the hotel was really nice. Wi-fi access in room not so great though.

Hubby and I already joined the Ice Watch Light Up The Night Run, the night before and I was super excited to run another 10K with my friends who joined the race too but I somehow got a bad case of chafing on both my inner arms so I decided to DNS the 10K so as not to aggravate the pain further and we chose to follow the 5K runners and Hubby, took photos of the runners in the run.

It was rather annoying to get chafing when I was wearing all my favourite race attire and had run in the same getup for a Full Marathon just two months ago! But I guess I got fatter lah. All the makan session I had done the past week. Huhuhu 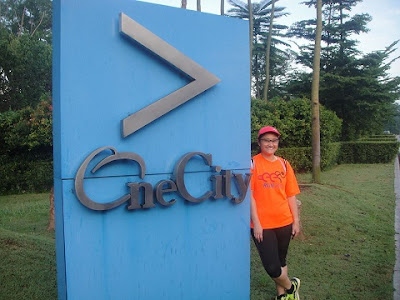 It was our first time visiting One City and overall impression, it's a nice neighbourhood with a nice route to boot. Wouldn't mind coming here again for a race.

Since we only covered a short distance, there isn't really much to talk about. 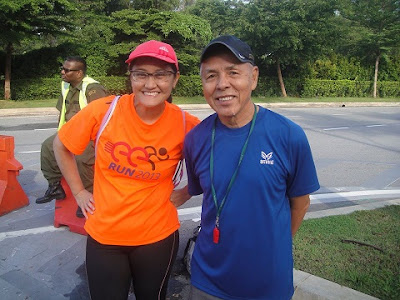 We met friends, both who had done a run the night before and those who only did the race's 10K on Sunday morning. We met with respected runners who were on duty as volunteer marshalls and had a nice chat with them. Always a pleasure to meet the humble runners who are never stingy sharing their experiences. And we took a lot of photos.

We didn't plan to take that many photos this weekend and I had left my NEX camera at home and brought our dinky, very old, rather slow T-90 camera instead so the photos were a bit... ugh. Sorry about that! BUT I still take offense at comments asking me to change camera! 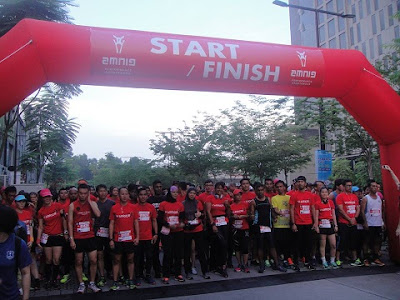 But overall impression :
And yes, totally digging their event tee! I wish I changed mine to L size! Hahaha

The sling bag they provided during REPC was nice too.


Even though I didn't do my 10K, I still feel I had a good Sunday morning outdoors. One doesn't necessarily need to run to enjoy and support a running event. ^^
Email Post
Labels: Events Itchy Feet