Two Runs, One Weekend (Saturday at Ice Watch Light Up The Night Run)

It was supposed to be a two 10K races for me to run in this weekend, in Ice Watch Light Up The Night Run in Shah Alam and I Am Warrior Run at One City. I had to regretfully decide not do the New Balance Home Run 16K which had clashed with the Ice Watch Night Run... So many races but only one pair of legs, attached to one body of mine. And somehow forgotten to tell a friend that I wasn't running in the New Balance Run after all. Huhuhu

Both Son and I kinda had a full first half of the day before we headed off to where Hubby works to meet him before we proceed to One City first, to check-in at e.City Hotel as a birthday treat for Son and then headed off to Shah Alam to collect our race bibs and for the run itself.

Thankfully, a friend had kindly agreed to help to collect our I Am Warrior Run bib earlier.

Race bib collection queue for Ice Watch Run was still long when we arrived at Plaza Shah Alam where the run was held.

The slow bib collection (I guess many were like us and had waited until race day to come collect their race bibs and run in the race) wasn't an issue to me but I was a tad surprised when I didn't get the bib for the category I had registered for. There were a few others who faced the same issues it seems. 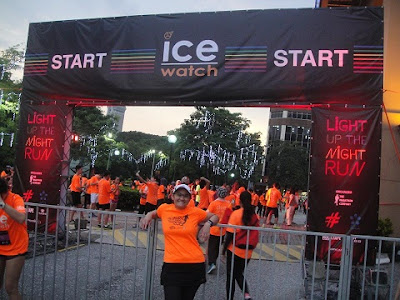 I told Hubby I didn't feel like running in the run although I do need to clock in some mileage for the weekend. Hubby suggested we just run our own route and maybe do a 3K before the flag-off for the 10K and 5K and give support to friends who were running when we were done. I started what was supposed to be my 3K run alone as Hubby only wanted to walk around.

Yeah, well. I did that pre-race 3K and then some. I actually joined the 10K runners after all and ran a total of 13.22K that night! So much for not wanting to run, eh?

As at first I was just running my own route, I didn't wear my race bib (obviously). At one point, I even told the marshal that I wasn't a participant and to ensure that nobody will think I was cheating, I made a point of veering off-course and not follow the race route. But running on pavements into the housing section of Seksyen 5 to 7 was a tad difficult as the pavements were uneven. 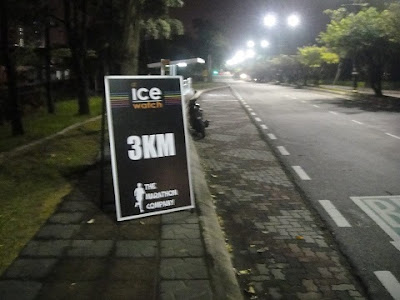 Anyways later, I had fun bumping into friends who were running officially and correctly in the 10K route. From KM6 (based on official KM marker), I kept calling Hubby. I didn't want him to worry about me as I had taken a lot longer to finish my supposed 3K run.

At around KM5, I followed the 7min pacers and there were two groups of them. The first group that I caught up with ran at what I felt a bit slow so after a while I passed them while running uphill (they were running three person abreast, hogging the precious running space and kinda made me pissed off as I couldn't overtake them without getting run over by cars that were speeding by) and later caught up with another group of 7min pacers, running at 6min+ pace.

There were three of them and one guy in the group was very encouraging towards other runners including me. He also shouted reminders to runners to keep left while running on the road as the road wasn't coned off to traffic.

As I was still "bibless" I didn't stop at any water station except for the last water station for two cups of 100-Plus. Had to take two cups as what was poured into the cups were too little! Mineral water was abundantly served in a small Habib's brand mineral water bottle but I didn't take any.

I also stopped a few times and even offered to push a friend's stroller when I saw him carrying his baby in his arms.

I saw Hubby waiting for me just a few metres away from the finishing line. He gestured me to stop and told me to put a bib on. He had a 10K bib (but men category) instead of my given 5K bib. I declined as I had no intention of crossing the finish line (no timing chip mah) but he pinned it on my shirt and told me to finish my run. I did. 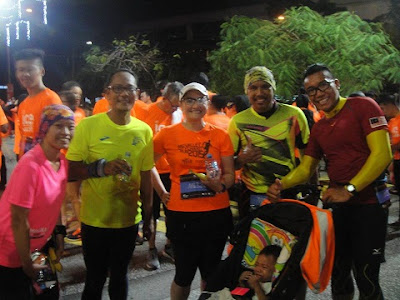 Do note, this is not a habit of mine to simply run, do my own route and distance during a race then cross the finish line. This is a one-off thing which I hope I won't ever do again. I'm just sharing what I did and wrote it here. 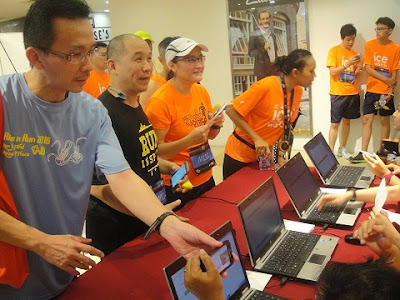 After the run, we had to wait to collect the Ice Watch that I had won earlier as one of the 6th 10K category participants who registered for the run. Although collection time was supposed to be at 10.00pm, a number of runners were already queuing at 9.40pm and we joined them. Hubby and I were later joined with a few other friends and we chatted and bitched while waiting for the watch's counter to be opened.  Even made friends with a runner from India who was queuing behind us who was pretty relaxed about us having a couple of friends cut queue and joined us in front of him. Huhhu

I guess last night was a night of bad behaviour for me during a race. 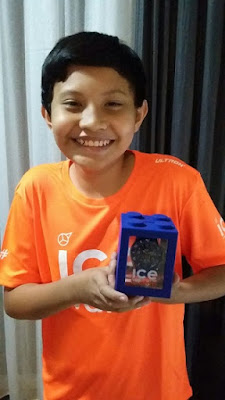 But the happy ending - The happy Boy who got the Ice Watch that Mommy won. ^^
Email Post
Labels: Itchy Feet Race Recap