Wishful Thinking... For A Staycation

The family and I have fond memories of Hilton Kuala Lumpur. It’s not like we visited the hotel often (not rich la), but its location is rather hard to miss for us. Everyday also can see one the hotel building from the road.
The hotel is located in the KL Sentral area with the main arteries of KL public transportation right at its doorstep and most important, Nu Sentral is right beside it! Transport and shopping! This is the place to ditch the car and travel by either train, komuter, monorail or even buses and go around the city.

And oh! Taman Botani Perdana a.ka. Lake Garden and Muzium Negara are just walking distance from the hotel. Serious. See the above photo? From Lake Garden la tu! I have always “berangan” to do a luxury staycation there. I mean, stay a night in the hotel, wake up in the morning, and head to Lake Garden for a morning run before taking a leisurely breakfast back at the hotel. That would be nice, right? Sound so syiok… *wishful thinking to its max*

A friend of mine always posted up photos of her brunch at Graze, Hilton Kuala Lumpur and I’ve been wanting to head there and do the same too. She kept on telling me, the price there aren’t that much different from any other “hipster” joint in KL and the quality is of course, much better. *jealous*

Every year, whenever I signed up for Standard Chartered KL Marathon, I tried to “bodek” the Hubby to let me reserve a room at Hilton KL so that I could take my time in the morning and not rush over to the starting line before the flag-off at 4.30am.

I was successful when I ran my first half marathon. It was pretty much a last minute thing, we reserved a room that Saturday morning itself and checked-in at 3.00pm. I told Hubby, I wanted to feel calm before my first half marathon and sleep on a nice bed before the run. The bed was so nice, I almost didn’t want to go out and the join the run that morning! LOL

It was great to be standing in the room at 3.00am, which was located at the club level (got promotional rate that time…) and watched the Kenyans and other fast full marathon runners blitzed through Jalan Travers as I was preparing to go down and join the half marathon. That was way back in 2012 if I’m not mistaken.
It was also great to return to the hotel after the run, enjoy a luxurious breakfast then have a soak in the bathtub before taking a well-deserved nap on the comfy bed.

Thanks to a friend who made it happen. *much gratitude* Mom (me) was mighty chuffed too. 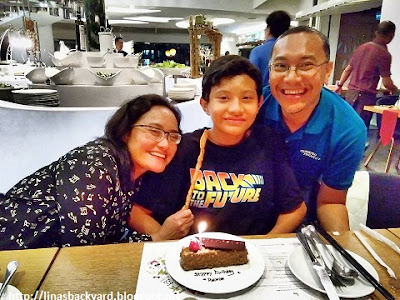 The hotel staff even brought out a birthday cake for him. So nice of them, right?

It was in December so there was a Xmas buffet promotion going on at Vasco’s and since both Hubby and Son love turkey, they had a ball at the buffet line. Me? I just went on an oyster and cheese binge. Muahaha

Anyhoo… more recently I’m seeing quite a number of friends who are fellow runners making hotel reservations through Traveloka. One had a pretty good deal in Jitra, Kedah when he went to run in the Jitra Marathon. A few others did posted up Traveloka’s hotel deals in their Facebook status too.

And since we runners do tend to run outside of Kuala Lumpur too, the website and app is sure helpful in planning a trip!

p.s. So, let’s cross fingers and hope there’ll be a good, cannot be missed deal to Hilton Kuala Lumpur for my birthday in 2 months’ time. *massive hint to whomever it may concern*
Email Post
Labels: Checking-In Close to my heart