Run For A Reason At SCKLM 2018 Half Marathon

It should have been the race I wanted to break 2:20 or at least break my SCKLM HM timing of 2:27  that I did in 2016. With that in mind, I also chose to Run for A Reason and run for charity, supporting National Cancer Society Malaysia at SCKLM 2018.
Unfortunately, any form of training went bust since late 2017 and I just indulged in being slow but raking mileage in the month of November with UM24 (got a surprise 3rd placing for the 6-hour category) and MKH 12-Hour (a 13th place - not a surprise since I was really gunning for the mileage and got a total distance of 64K).

With slow half marathons done in November and December at KUL Marathon (25K) & Bentong Half Marathon, I kinda felt that anything sub2:30 is slipping away for me.

I did better despite a non-existent mileage, at Itabashi Riverside Marathon in early December but it took quite an effort for me to finish (and having the sweeper van always in view kinda helped me pushed lah. LOL).

I was still slow at Twincity Marathon and Skyhawk Nature Run in January 2018 but I had hoped that I'd redeem myself at Bukit Jalil Half Marathon which was held in March 2018. My PB at the hilly Bukit Jalil HM was a 2:31 so if I can get near this timing, I'd be OK.

Well, suffice to say, no such luck.

Training for SCKLM 2018 started proper on Jan 8th and I started my training with a long 22K run at Skyhawk Nature Run followed by Twincity Half Marathon. Later, I only managed to do 11K or so when I attended SCKLM running clinics in Feb and with an almost negligible mileage in March. And a final 17K LSD around my apartment the Sunday before SCKLM.

Long whine short, I still made it to the start line but fully knowing a sub2:30 won't even be possible.  I didn't try hard or commit hard enough or sacrificed enough to train for my target, I guess.

Anyhoo, I made it to the starting line on Sunday morning, Apr 8th along with 11K other half-marathoners. That was such a huge number of runners for a Malaysia race and I could certainly felt the excitement building.

A friend hollered from the same Pen that I was supposed to start at, and it was a surprise because I thought he'd be running in the Full Marathon category. Bumped into a few others and one of the organizing committee member remarked that I looked way too serious!

We were flagged-off at 5.30 am with a bang and it took me almost 2 minutes, being in PEN 3; to clear the start line.

The first 6K or so was flat and interesting for me. We ran along Jalan Raja Laut then enter Kampung Baru before heading out towards Istana Budaya.

It felt easy and as we make a turn in front of Maju Junction, we were greeted by buskers' performances. Runners clapped and hooted to show appreciation to the buskers and it was great! I think they played a song "Saya suka bangun pagi" or something in the lyrics. Hahaha

Subuh azan was heard just as we entered Kampung Baru area and many runners dashed to a nearby mosque for their subuh prayers. A number stopped farther ahead to perform theirs.

The route was different from what I had done in 2012, 2013 and 2016 so it was a novel experience. I love the coloured roadside lights along Jalan Raja Laut to Kampung Baru. And running on the flyover with view of the roads as we got to Tawakkal Hospital was great!

Notable mention - the only time we got honked was running in Jalan Dang Wangi so the whole run was rather stress free, traffic wise.

We merged with the Full Marathoners at around 9K mark I think, and FM runners were at their 25K mark and we shared the same route heading out to Jalan Kuching.

The Lucozade station or something with cheerleaders and motivational signboards were great to see as we hit the highway.

As we got to the toll booth at around KM11, I was reminded that this was the KM33 mark when I ran in the Full Marathon category last year. And also where I lost sight of my friend last year, who was the 6:30 pacer - Evelyn. She kept on cheering runners and hollered my name just as she was approaching me during SCKLM 2017 and it made me felt emotional as I trudged along the same road this year.

I was also reminded of another late friend, Gai who passed away because of cancer early this year.

That KM33 mark last year was now KM11 for half marathoners and where one of the water stations were located.

And another WS was located there. It felt to soon to have another WS and I wasn't feeling particularly thirsty, but being Malaysian (and both kiasu & kiasi), I still stopped to have a drink. Takut no WS up ahead. LOL

Bananas were served here, apart from cold sponges. If I recall correctly, there would be just one sponge station in previous editions but every WS from KM9 seemed to provide cold sponges, even the last one located near Muzium Negara! (or maybe I was too slow to get the sponges last year lah.)

And there were two mists (one with water at Jalan Kuching, another one was mist) heading to Parlimen, I think. 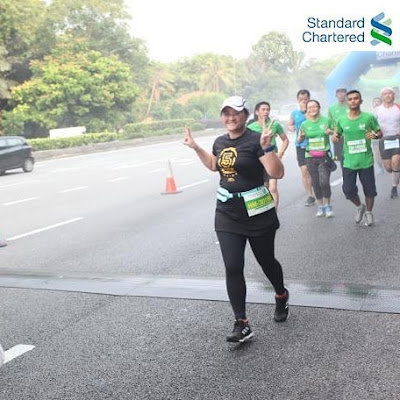 There were a few timing mats along the route and they were also equipped with AES camera to capture our photos and upload it immediately to SCKLM app. Dun play-play!

I was running pretty steadily at that point. Not too fast, and not too slow either. There were a few walk breaks when we went up some uphill section as I didn't want to go on an all-out bonk kinda run but because I was running for charity this time, I didn't goof around as much and didn't stop to take any photos along the route. Not much goofing about, except from stopping unnecessarily at e.v.e.r.y. s.i.n.g.l.e water station, that is.

Last year, full marathoners would have turned left to Langkak Tunku but their route changed as they proceed farther ahead to PWTC. For half-marathoners, we head out from Jalan Kuching to Jalan Tuanku Abd Halim past the National Hockey Stadium and Istana Negara. I had opted to take walk breaks upon reaching hard inclines and this section was no exception.

I had even taken walk breaks here when I ran in 10K in other races la!

The section here wasn't fully closed off to traffic but a lane was coned-off for runners. Occasionally, we'd see runners running outside the coned area, to "potong" other runners. I kept a vigilant eye on them and was ready to holler should any runners be running for long outside our designated lane.

Finally we reached the last 3K at Parliament and we merged again with the full marathoners. This section is the same as previous SCKLM and I knew what to expect. One last incline and a downhill as we turn into Muzium Negara, one last WS there before we ran to Dayabumi and straight to Dataran Merdeka. 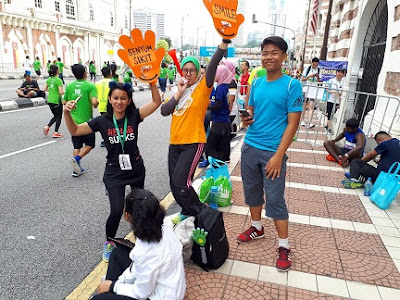 I also knew that the last 500m would be filled with supporters who came or stayed behind after their run, to cheer for other runners. And where quite a number of photographers (who are not only photographing full marathoners along the route) were stationed. 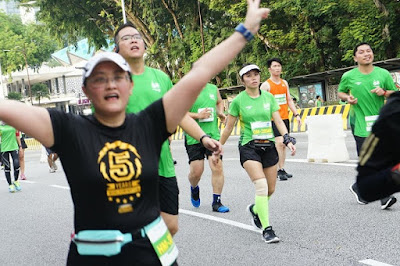 I smiled broadly and raised my hands up every time I see a photographer aiming their lenses at us. Just like to the volunteers and contractors (yang tolong kutip sampah), I said thank you to each of them - regardless whether they did take my photo or not.

My timing wasn't fast and I definitely didn't get anything near 2:30.

My apologies to those who had kindly and generously donated for NCSM through me as I was unable to do sub230 at SCKLM 2018. But thank you again for your kind generosity.

But it was a great run and I enjoyed it a lot.

Thank you to everyone involved for making the run an awesome one!

I didn't linger at the padang at Dataran Merdeka for long. Hubby was taking photos in front of Pos Malaysia HQ and I went there and joined him to take photos too and also cheer up the runners who are finishing their run.

Photos taken between 8.22am to 10.00am can be viewed at Cik Arnab & En Kura-Kura Facebook page. Do LIKE and FOLLOW us for more race updates and photos.
Email Post
Labels: Events Itchy Feet Race Recap