After our visit to the Masjid Negara (National Mosque) we realized that it was almost 7.00pm and we need to eat dinner soon. We had lunch at the Malay Tea House and I totally forgot about my plan to have Nasi Ambeng or maybe Sup Tulang at Lake Garden; so we need to find somewhere to eat pronto. It was starting to drizzle in the evening so any plan to eat al-fresco was scrapped.
A visit to Jalan TAR's  night market was also on the card that day, so we head to Jalan TAR which was jam packed with traffic both vehicles wise and pedestrian wise. Zaini parked the car at the much quieter Maju Junction mall and we had dinner at one of the few places still open at the mall. Man, this mall is quite dead in the weekend. I wonder why, when you have a bustling crowd in the nearby area - Pertama Complex, Sogo not to mention all those shops in Jalan TAR? 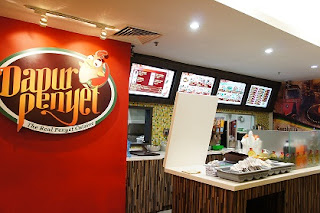 Dinner that day was at Dapur Penyet  in Maju Junction mall. Our first ever taste of ayam penyet! WOOT! Not a Malaysian fare, but well, we are in Malaysia. We eat internationally here, no? And like I mentioned to Anna - there's plenty of Indonesians here in Malaysia so Indonesian fare is not exactly hard to find here. 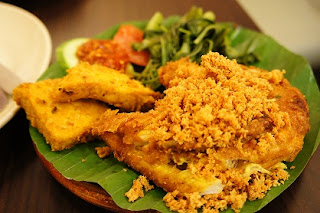 For those who have no idea what Ayam Penyet is - it's a traditional Indonesian cuisine which originates from Surabaya. The chicken is specially marinated with various spices and herbs from certain plants. The meat is then smashed with a wooden headed hammer and deep fried until golden light brown. 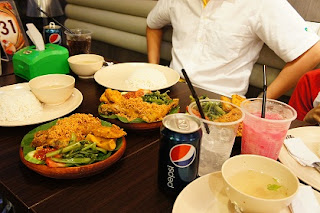 Everyone had the same thing which was their promo set (RM6.90) that consisted of rice, chicken and drinks of our choice.The chicken plate also consisted of boiled kangkong, fried tempeh and tauhu along with a nice dollop of sambal and a small bowl of soup.

Then, it's off to Jalan TAR night market!
Email Post
Labels: Makan Time Out and About