A Visit To Islamic Arts Museum

Read my previous posts on places we visited on Christmas Day, 2010 and having a ball being touristy and all:
Having lunch at the Malay Tea House in Central Market
Admiring the Sultan Abdul Samad Building
and Dataran Merdeka &
a nostalgic trip back in time at KTM Railway Station.
That day, we also visited the Muzium Kesenian Islam (Islamic Arts Museum), just a short walk away from the railway station.We always passed by this museum on our way to Lake Garden on weekends but we never made a stop here, thinking that we would not be permitted into the museum with what we were wearing (shorts and sweaty shirts). Happy to inform you all, there is no strict dress code to the museum. But of course, be practical and dress appropriately. 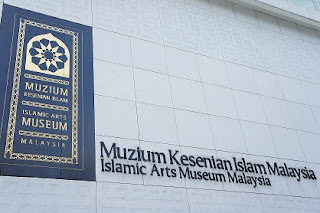 The Islamic Arts Museum Malaysia (IAMM) was officially opened on December 12, 1998 as a gift from the Albukhary Foundation, with the assistance of the Malaysian government and the Islamic Department of the Islamic Development of Malaysia (JAKIM).
The style of the museum building is modern, with an Islamic feel. On the roof, artisans turned the dome-construction traditions of Central Asia into the building’s crowning glory. The turquoise-coloured domes are now a landmark on the Kuala Lumpur skyline.
Inside the building, the angularity of 21st century design is contrasted with the soft, rounded forms of the five domes that dominate the museum’s interior. I was completely smitten with the domes. Instead of trying to photograph any exhibits (or looking at them much), I spent my time there looking at the domes and making my neck hurt in the process. LOL 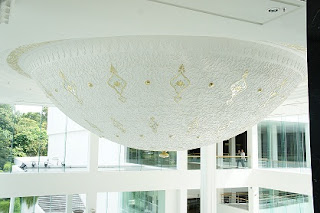 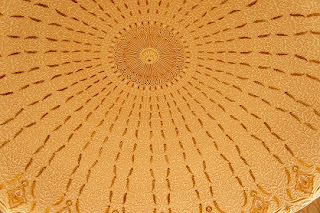 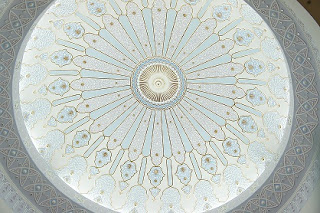 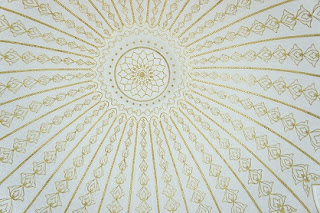