Four months ago, while I was searching for a half marathon to run in, a friend highlighted to me about IJM Land Half Marathon which was held on Sunday, Aug 13th, 2017.

The event was in its 6th year but I think I've only really known about it last year, but didn't sign-up for it. At that time, truthfully for me, the buzz wasn't that much for me to want to drive to Seremban 2 (or rather ask Hubby to drive me 50km to the race venue) to run in it.

It still felt rather low key this year, in my opinion; as although the event was covered in a few newspapers and they held running clinics prior to the event, I couldn't find much social media shout-outs about it.

I tried to read up on previous year's blogs on the event but 99% of blog posts on it were from lifestyle bloggers but they unfortunately didn't write about running in it at all. Hur hur.

So not knowing what to expect, I hesitantly made my way to Seremban 2 on Sunday morning. Not only was I hesitant because I couldn't find much info, hubby wasn't feeling well and I haven't been training much prior to IJM Land Half Marathon. There was absolutely no mileage last week (as we spent our weekend taking photos at TMMT) and I only managed a 5K on Saturday morning. Talk about last minute cramming session! LOL

Anyway, I sure was glad to made it to IJM Land Half Marathon.

Exiting from the Seremban toll, we almost immediately could see signboards for IJM Half Marathon so getting to Dataran Centrio where the race village was located was very, very easy.

Signages for parking area and surau were big and easy to see too. *thumbs up*

It was drizzling when we arrived at around 5am (got there early as I had no idea what the flag-off time was as it only mentioned on the website that the event will be from 6.00am to 11.00am) but fortunately it stopped later. 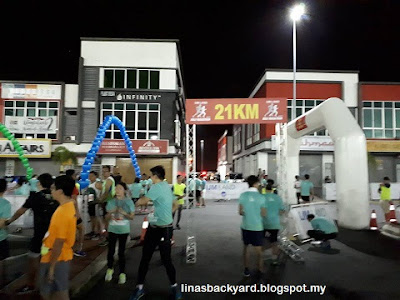 Dataran Centrio was already abuzz with activities and with runners milling about, even at 5.00am. We decided to take a nap and I only went and check the area out at 5.40am.

At around 6.00am, the warm-up session was held and it was a good warm-up. The instructor was even heard telling us not to overdo it as we won't want to be tired to run afterwards! LOL

The stage area where instructors were standing was good and well-placed as runners from all angles could see them.

The starting area for 21km category, boys & girls category and fun run category were separated which was excellent for me. I made my way to the start line 5 minutes before flag-off and there was quite a decent turnout for the category.

We were treated with fireworks display before flag-off and off we went, at around 6.20am.

I have to say, I like IJM Land Half Marathon route.

The roads were wide for runners.

It's peppered with long but (thankfully) gradual climbs so we got a pretty nice rolling route to make it stay interesting.

The volunteers  were cheerful.

The air felt fresh and it sure was nice to be running outside the city.

I didn't realise a friend was running beside me at around KM2 as he tried to take selfies of us running together. But when I did, we chatted a bit and I realised then, that I was running way too fast for my current fitness level at 7.10 min pace. Adeh.

He later surged ahead by KM3 and I ran alone, just enjoying the scenery and stopping at ALL water stations. As usual, I only drank water and skipped the 100-plus.

It was at around KM4 (if I am not mistaken) that we saw the lead runners already making their u-turn at the other side of the road. Later we saw more runners as we approached Petronas station but still no u-turn in sight for us!

The route even brought us running to the IJM Land office and then, finally the u-turn and downhill section. Wooohooo!

I was pleasantly surprised that I still could run non-stop without walk breaks at KM8 because I had expected that  with my lack of mileage and training, I'd struggle after 5km but I was still feeling good albeit not running that fast lah.

I was careful not to over-exert myself and kept my effort to Zone 3 and it paid off. 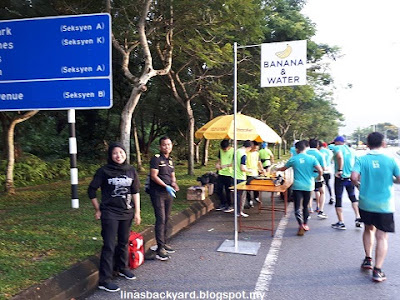 Banana and water station at KM11 ish(?) I think. They served pisang mas and plain water here but by the time I got there, paper cups had already run out so we drank out of bottle.

There was another water station just up ahead (less than 2km apart) and no shortages there and at other subsequent water stations. In fact, KM15 WS still had plenty of drinks for runners.

By KM12, I could see 10K runners merging with half marathoners on the other side of the road  but I still got a long way to go to get there. And a few more climbs to tackle.

The climb from KM13 to KM15 was particularly long and while at first, I was relieved to see the downhill section from KM15 to KM16, it was short-lived. 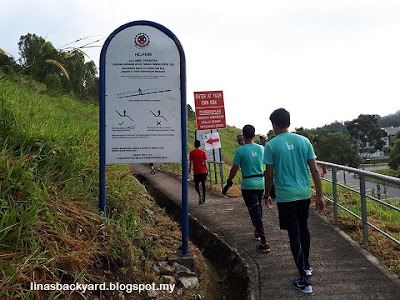 Because as we approached KM16 (and the second checkpoint spot - the first one was located at IJM Land ofice), we arrived to the foot of a hill and had to proceed going up that blasted hill.

Most of us were reduced to walking by now. Hahaha 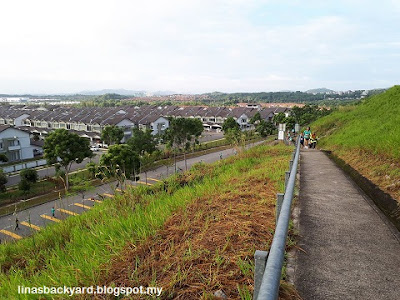 Halfway up the hill.

Nice view of the housing area but after running for 2-hours, I was just cursing and holding on tight to the railing and move slowly upwards. 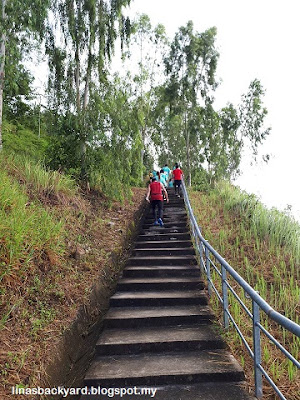 The RD sure has a weird sense of humor. Not only we had to climb that steep hill, we had to endure stairs too! Banyak jahat RD ni! 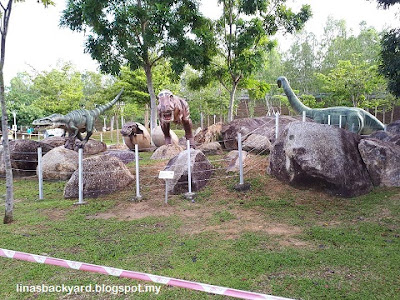 When I arrived to the peak, I finally appreciate the reason the RD made us go through this particular section.

It's to introduce the well-maintained Hill Park to us out-of-towners.

Got dinosaur some more there, you know!

I was greeted here by a friend who was a crew, with a big, evil grin! She later told us via instagram that she did received a lot of "curses" from runners. HAHAHA

It was a 1km climb (plus park area), and from KM17 to 18 it was blissfully a downhill so we could run and make up to lost time spent earlier huffing and puffing up those stairs.

And at the last km, we were served yet another climb (just a short one, thankfully) before we made our final dash to the finish line. 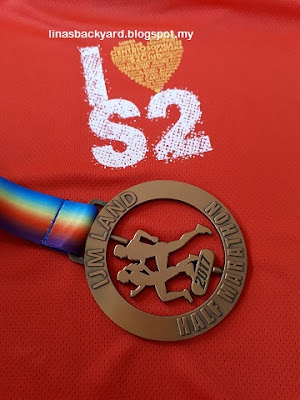 It was indeed a very nice run and I was sure glad I decided to run in it despite my earlier indecision.

At the moment, this is my second favourite half marathon route, after Bukit Jalil Half Marathon.

The emcee was good.
The marshalling and traffic control were superb.
Crew and volunteers at the water stations were awesome.
Distance markers were big and placed at 1km apart.
There were those who cheered for us as we were running towards the finish line.
The route was nice and we were served with plenty of climbs (including stairs!)
Race village layout was great and spacious and runners were able to mingle around without feeling cramped.

All in all, a very good Sunday outing for me.
Thank you to IJM Land for this very nice run.

Photos of some HM finishers can be found over at my FB page @CikArnab
Results of the run is available at www.ijmlandrun.com

But one point if I might add. Instead of giving us timing behind winner which I think 90% of us couldn't give a crap about, why not give us timing splits at the checkpoint in the result?
Email Post
Labels: Events Itchy Feet Race Recap