First of all, a big congratulations to Muhaizar Mohamad for bagging a bronze medal at the marathon event in the 2017 SEA Games! Congrats too, to Leo Tan for his 4th place finish!

The SEA Games marathon event was held on Saturday, Aug 19th 2017 and alongside the SEA Games Marathon, a run for public was also held, called Larian Sukan SEA 2017.

Admittedly, a number of us signed up for the chance to get the Larian Sukan SEA medal (got mention Sukan SEA mah. That in itself is rare) and for me, I signed up because I liked the route that they had published in the registration page. It look similar to the old Putrajaya Night Marathon route (well, part of it anyway) and we should be passing two of Putrajaya's iconic bridges.

Mana tau, when we received our Runners' Guide in the REPC notice in the e-mail, the route was changed quietly. There were no notice or announcement (that I saw) about the change and lucky la, I am the type that read runners' guide. Hahaha 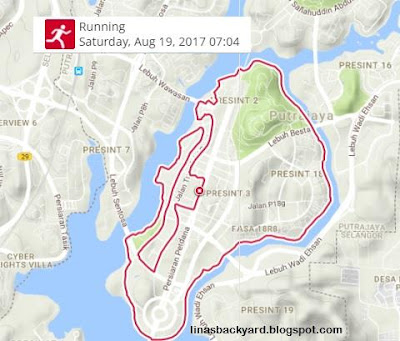 We ended up running about 4K total on tarmac and the rest was on the cement pavement around the Core Island.

Admittedly, the route is very scenic and many runners stopped to take photos with backgrounds of Jambatan Seri Gemilang, Putra Mosque (Masjid Pink) and whatnot but that's not what I signed up for.
Hell, I used to do LSD using this route and alone because it's quite safe. Used la. Now, better run around my house and save petrol.

The pavement was narrow and although we still could run, it entailed plenty of zig-zagging.

An advantage for the organizer for using this route was they could do away with traffic police and route marshalls. I only saw two traffic police during my run but they couldn't do much anyway with a huge number of runners and traffic still insisting to pass through and also runners not caring for their own safety when they were on the road section. (Traffic cones were expensive to rent for the whole 4K section of the road, I suppose). Only saw ONE ambulance & medic along the route as they were stationed nearby the Presint 18 Futsal court.

Plus point - the organizer did put HUGE distance markers at 1K interval. Water stations were placed at 3K interval with plenty of 100-Plus and water although it did seem that the volunteer struggled to pour drinks for runners. But never mind, can always be patient and get a cup anyway.

I ran with a fellow GC member for the first 3K as he said he'd pace me. I didn't set any target but he asked whether a 7:15 pace was OK and it was at the time. But I told him to go without me as we were approaching KM4 because I needed to do a toilet stop.

Then it was running alone for me, and that meant starting to go slow. Hah hah.

Run, start with a bit of walking after KM12 (good job KM12 water stations peeps for cheering for us. Thank you!) and then by KM13, I saw two runners with GC t-shirt. They surged ahead but I caught up with them again at around KM14. I kept them in sight as a target (so I don't get lazy and start walking) and ran up to them when we reached Dorsett Putrajaya. Thought of saying hi, but I didn't know their name. Adeh. Huhuhu

Then one last incline (I walked up it. Penatlah), and then it was run to the Finish Line. 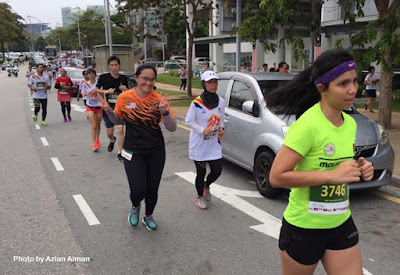 But not before give peace sign when people take photo. LOL

I saw hubby waiting for me at around 100m before the finish line to take my photos too. 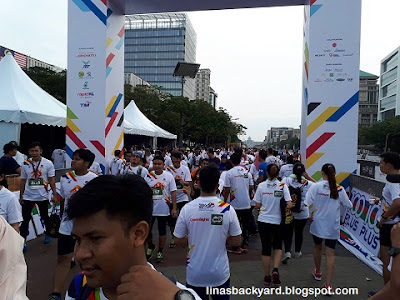 The Finish Line was a bit of a mess because there was absolutely no control by any crew or volunteers. So runners were blocking the route as they were taking selfies and wefies and then you have approaching runners just finishing and all...

It was the same during flag-off. I saw runners walking towards the Start Line from the opposite side as we were starting to run. And there were a number of 5K category runners already in the Starting Pen with the 15K runners when 15K category runners were flagged-off. No wonder the pen was so packed!

Then it was time to look for my finisher goodies and medal. Since there was absolutely no crew or volunteer to direct us anywhere, I just jalan saja. (Saw one volunteer giving directions to runners later. But one guy only la...) 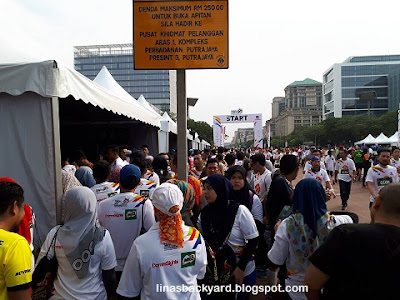 At first I thought this was where we collect our stuff. Turned out this was booth for merchandises. Laaaa.... Like pasar malam dy... 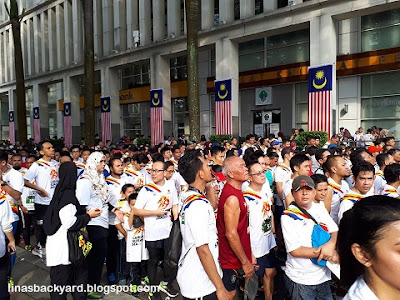 This was the queue for medals.

Both 15K and 5K runners get same finisher goodies. 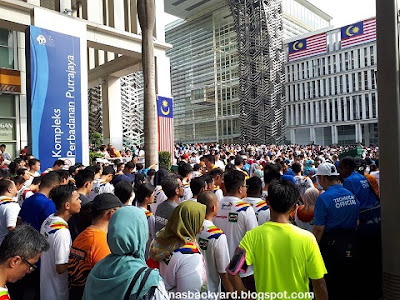 So, what else to do? Join queue lor.

It was supposed to be quite fast since it's just take one bag, tick bib and move but dunno why it got so slow. And dunno why need so many TO (technical officer) there. 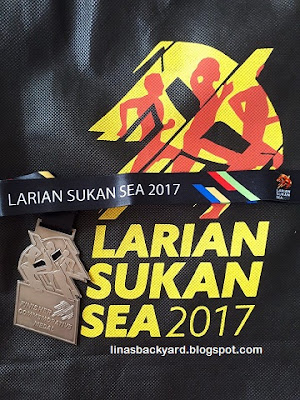 All that hassle because I want this piece of metal. Hahaha

MASOC needs to buck up and relook at how they organize running events because it feels like it's been organized by budak sekolah.

But anyway, it did brought a huge crowd to support SEA Games marathon event, right?

p.s. Seems like MASOC made another f**k up with the careless mistake on the Indonesian Flag printed in the Opening Games Ceremony booklet is it?
Email Post
Labels: Itchy Feet Race Recap