UM24 is an endurance run which has the format of looping around a 400m track in University of Malaya stadium for 24-hours, 12-hours or 6-hours.

I actually registered for the 24-hours category during its inaugural event back in 2015, when I was still trying to achieve my 100km target but alas, they had to change the venue and it wasn’t at a place where it was convenient for my family to go and support me. I can run anywhere but I still need to consider my family whenever I go out for a race so it was a no go that year. 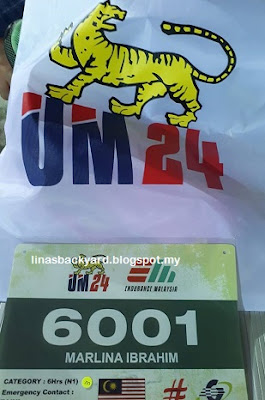 And here I was, finally doing the UM24 but at a much lesser category. Thanks to Ten Senses, I entered the 6-hour (Night) category as part of my training for my upcoming Putrajaya Night Marathon and another bigger race slotted in 2018.

I had done a 30K the week before, at Newton Challenge 30K and I thought another 30K this weekend would be good training for me (plus another 12K later at Augustman Run).

The plan and target were simple. Since this is a time-based run, I run looking at the time and not so much the distance. And I kept my mind occupied and motivated by glancing at the clock monitor which was located at the timing mat area so I know how much time I spent completing each lap.

Yeah, it was a positive split pacing target.

Essentially, I targeted to do 30K within 4 hour 30 minutes mark. Slow and steady. Haha

My category was flagged off at 8.00pm sharp and after running non-stop for one hour 10 minutes, I did a toilet stop and my first drink stop. My second drink stop was 10 minutes later, and I was still able to finish my first 10K faster than my target. 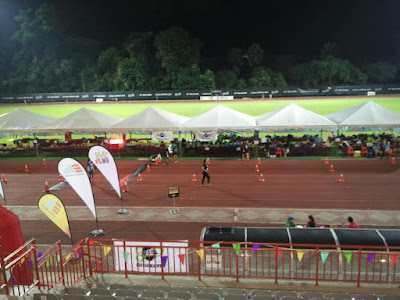 I had started way too fast at first, doing a 6 minutes plus pace so I had to forcefully slow down so that I won’t bonk mid-run.

The night was hot and humid and in no time at all, I was soaking wet with sweat. I was kept entertained during the run with the music the organiser had put on, and also by fellow runners who joined the event and those who came to give support.

My second drink stop was made earlier than planned (I planned to do a drink stop at every 20-30 minutes interval) because a runner/friend/photographer; Tey brought everyone ice cream potong. I had ice cream potong durian and it was so nice. 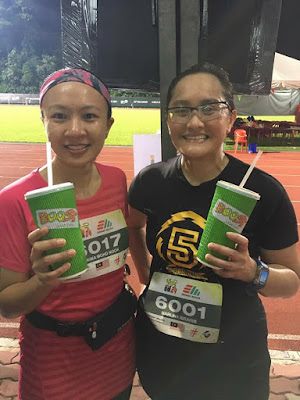 Another friend, Doc Mimi dropped by at around 11pm and by that time, we were already running for 3 hours and she brought Juice Boost protein shake for me and another GC kaki, Karima. The Doc came to give us support although she herself had a race the next morning, a triathlon in Putrajaya no less! She emerged Champion for her age category too! Congrats Doc Mimi.

I reached my 30K faster than targeted and instead of stopping, I continued on. I kinda told myself that I should do at least one good run for the weekend and do it at UM24 and then do a really slow ass run at Augustman Run instead of two half-arsed effort races. But at that time, I calculated that unless I pushed, I wouldn’t get my 40km target. Maybe 38km at best.

For fuelling, we were served with an assortment of drinks and food at the drink station but despite the gastric issues I faced the whole day that day (forgot how many times I visited the toilet, purging also lah), I survived by drinking the hot milo served at the station plus watermelons & pears. And oh, the ice cream potong. Later, I drank the Juice Boost protein shake and hot milo. Old gastricky tummy cannot drink cold drinks so the hot drinks was a godsend. Absolutely no isotonic or coke consumed during the run for me that night.

There was a special needs table located beside the fuelling station for us runners to place our stuff, and we had each our own space, allocated with a mini printed card that looks exactly like our bib. So senang to locate our place. And all I put there was my gastric medicine, 4 pcs of Torrone barley mint sweets and Doc Mimi’s protein shake. 6-hours race only mah. No need to bring the whole kitchen sink to the race kan? LOL

However, I did stash my stuff for the next day’s race in the luggage drop area located at the bleachers. I also packed some change of clothes to sleep in because I had planned to sleep at the stadium after finishing my run at 2am while waiting for Hubby to pick me up at around 6.00am and go to Augustman Run which was held at Lot 10 together.

About 10 minutes before the 6 hour mark, I saw Hubby standing by the track area. Turned out, instead of sleeping comfortably at home like I told him to do, he actually slept in the car from midnight, while waiting for me to finish. So kesian. I guess he didn’t want to go home but didn’t want to distract me by waiting at the stadium either.

I was walking at the time and he told me to run. And of course I did. Suffer already but Hubby told me to push and I did that final push la. And for the final 2 minutes, I actually tried to sprint to cover as much distance as I could before the horn sounded for us to stop running. We were given a name pad by the crew a few minutes earlier, and when at the 6 hours mark, we need to put the pad on the track to mark our final distance. 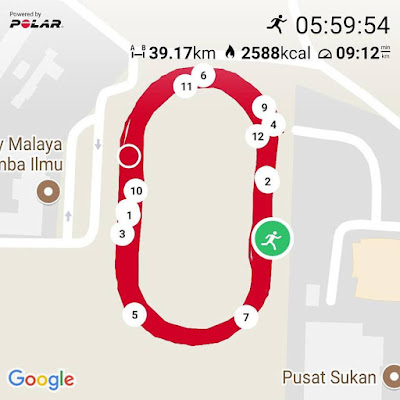 A crew later came to calculate each of the runners’ distance for final tabulation.

Hubby had wanted to head home immediately after I finished but I kinda wanted to stay for the award certificate ceremony. Every runner gets their framed certificate with the total distance covered printed and I wanted to collect my certificate the same day instead of returning later.

I was glad I waited because I got a surprise. 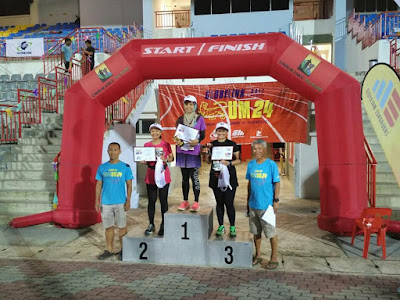 I made it to third placing that night! My friend Karima got second placing. Yeay, us! And to think both of us were whatsapping each other prior to the race and having our private drama about running in the event. Kikiki

We finally reached home at 3.00am and I took a one hour nap before getting myself ready for Augustman Run which was flagged off at 6.45am, Sunday morning.

Poor Hubby of course had to wake up too and send me to Lot 10. Poor fella.

While doing the UM24 laps, I kinda wondered why on earth was I doing this but I still kept on looping the track. Karima and I had kinda declared that maybe we shouldn’t repeat this again next year right after we finished our run but all was forgotten after we received our placing trophies. Hahaha

Will I join again next year? Maybe. But I better not sign up for any races on the same weekend like I did this year!

Thank you to the organiser and their crew for a superb race.

Also congrats to Globelink staff (Globelink is the title sponsor for UM24) who joined the run. There were a few of them in my category and some really struggled during the run but every one of them was tenacious and did their best to complete the 6 hour stint. You guys have my respect and I hope I’ll be seeing them again in future races!
Email Post
Labels: Close to my heart Events Itchy Feet Race Recap