I didn't plan to join any races on the first day of October but that was until BHP Orange Run came out with their date.

With just RM5 registration (no event tee or medal of course but who cares) this is the cheapest race around (except the one that's free lah. I heard a textile outlet will have a free race in November. Ehem).

Anyhoo, leading to Sunday I was feeling rather yucky (what's new?) and with an ankle that I kinda twisted in the office (yeah, injury always happen when not running); it was just a mere 1K run, 1K walk to test the ankle on Friday for an hour, a 2-hour workout around Lake Garden on Saturday (so much drama just to do this 2-hour also. Ahahaha) and finally this 11K at BHP Orange Run.

More drama. I didn't really want to go and run that Sunday morning and had contemplated in just sleeping in and let hubby rest (use hubby as excuse summore. wakaka).

But a friend had secured me the bib for the BHP Orange Run and it wouldn't be nice to FFK her, right?

The thing about BHP Orange Run is, it is by manual registration only and can be done at just a few selected BHP Petrol Stations. So got friend to help register is great, when you're not living or working anywhere near those petrol stations!

So I dragged myself and  Hubby and made our way to the Curve.

With more than 4,000 runners joining the run, it was a nice crowd. Men were flagged-off first (probably for crowd control) and Women 15 minutes later.
We arrived early and waited for the friend with my bib to arrive. But later, stomach ache pulak then go off find toilet and missed out on group photos with the whole gang of Gaited Community kaki that joined the run.

But lucky still managed to get in this photo, mere minutes before the Men were flagged-off. 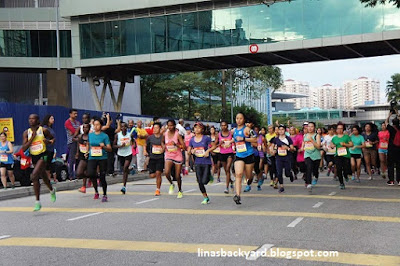 I was chit-chatting with a couple of friends and walking, and kinda forgot to switch my GPS on. Hahaha adui.

Since it was a rather big crowd and I was rather at the back, I didn't push much. Matter of fact, I spent the first 3K mostly walking and wondering why I'm running in this when I can be at home instead.

It was only after KM5 that I felt good and started to run at a better pace.

The route for BHP Orange run was good. I like it. We get enough hills to challenge ourselves but nothing too hard. Plenty of shaded area too.

The drivers too were mostly patient. There were marshalls at junctions and also the one cycling. Areas where traffic was not allowed to enter was coned off.

Plenty of signages and with distance markers too! And this for a RM5 race!

The only drawback for me (for me alone lah), water stations only served Lucozade. For someone who tend to have tummy problem when drinking isotonic, it could be a problem. Even for a full marathon nowadays, I mostly opted to drink mineral water. So yeah, I should've brought a bottle of mineral water myself.

The water stations were placed 3K  apart and that was great for runners. I was thirsty and I decided to stop and drink the Lucozade served anyway. Slowly and just a bit, just enough to quench my thirst. And lucky for me, apart from KM8 where I felt my tummy protesting a bit, there wasn't any major issues that day.

By KM9, I had picked up my pace and already were doing a faster 3K splits ad steadily getting faster.

I caught up with two friends later and another fella farther in front. He wanted to follow my pace and we ran together for a bit until he complained about getting a cramp.

Despite him telling me to run ahead, I stopped and walked with him until he felt better. Nothing to lose mah. Slow already, anyway.

We started running again about 500m towards the finish line as we saw another friend of ours waving at us.

By now, the two friends whom I caught up earlier were surging ahead and running fast to finish and I decided to chase them. Ahaha 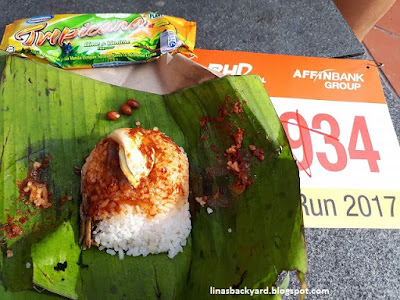 It was a fun morning. So much drama before the run but I was glad I did it anyway.

And there were still plenty of food when we left. Syiok!

I went to queue for my food and goodies bag and later had breakfast there. 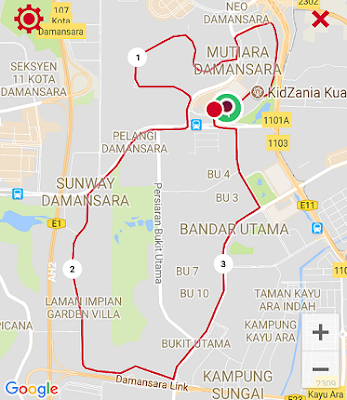 Now that I had done it and it was my first time joining BHP Orange Run, I will be back next year!

Photos we took at BHP Orange Run 2017 can be viewed at our Cik Arnab & En Kura-Kura page. Hop over and LIKE our page for more race updates!
Email Post
Labels: Events Itchy Feet Race Recap