So what do you do when your Polar Training program (that you kinda intermittently follow) requires you to run 2:15 for your long run?
I couldn't find any half marathon that was interesting enough (or near our home) to make me join them but one race caught my attention and that's the Newton Challenge 2017.

I joined the 25km category way back in 2012 and had a rather fond memory of it. Finished in 3:06 which was something I was rather happy with, at that time.

The 30km was flagged off a few minutes after 5:30 and just as we started to run, the azan subuh was heard. Some runners quickly made a detour to the nearby surau which was about 1K(?) away from the start line and some head to Petronas. Some, made a stop at a water station to perform their Subuh prayers.

Ah yes, water stations. I wasn't sure at what KM they were located since I didn't really study the route map (anyway, the route was pretty much the same as 2012 other than the additional route included to make it a 30K route) but I was surprised that the first water station was located at KM5.

Luckily, I was feeling good, without much drama (yet) and wasn't in need of a drink that early in the run.

The second water station was located at KM7.5 (do note that this is based on my Polar GPS reading as there were no distance markers along the route, other than the last 5km). Then it was at KM10+ and afterwards it was around KM13, followed by KM17.5 and so on.

The route was well coned off with traffic cones and marshalls were placed all along the route with visible route markers. Unlike way back in 2012 where there were dark stretches, the route is all well lit, 5 years on. The area sudah well developed lah.

I managed to follow the planned 8:00min average pace for the first 10km although I had to resort to walking uphill as early as KM6. And it was still pretty much on pace at KM15.

By the time I reached the first water station, the faster runners had already made a u-turn (one of many u-turns along the route) and a few friends hollered to me as encouragement. Even the pacers!

After I made the first u-turn, I noticed a few runners cutting short the course. It wouldn't affect their official timing as there were no timing mats or checkpoints at all along the route. 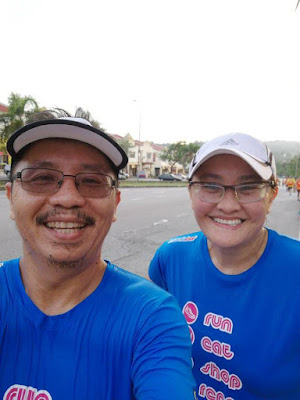 A few friend had caught up with me and after a short chat, they sped ahead while I just continued with my plodding.

I decided to take an energy gel at KM13 before I continued. It was truly an undulating route and with long climbs at each climb. I dunno why I love it the last time I did it. Hah hah

By KM18 I was a bit behind what I had planned to do but still on pace for a 4:30 finish. But it got progressively slower after that. I started feeling weird at around KM19 but still managed a 3-hour timing at 21K mark. Still surviving although I was a bit annoyed at myself for doing a 3-hour half marathon at that point.

Trouble reared after that as I finally conceded that I needed a toilet stop. A long stop as tummy was giving me HELL. Luckily I reached Petronas station and I made a 15 minutes stop there. Adoi.

Petronas station stop done and off I went again but this time, I was unable to run again. My heart felt like it was pounding way too fast for my liking so I decided to slow down.

I bumped into another friend farther up along the route as he was going out from a neighbourhood surau for a stop too.

We walked and talked a bit before he sped off and I just continued with my walk. I tried a few times to start running but was feeling rather lousy so I decided not to push it. Got more hills to tackle and I wanted to finish and not collapse in the middle of my run.

KM22 onwards was rather boring and the sun came out in full force by this time. It was nice and cooling earlier and the route shady. Now, it's open and hot! Blergh.

Since I couldn't run, I just made sure I wouldn't walk too slow and managed a 11+ min pace for my walk. By this time I started questioning my sanity of joining anything that's above 21km. LOL

I walked with a fellow runner for the last 2km and we walked and chatted about our run, our next runs and how we don't want to join any more long distance run after this (and then we talked about our races in MKH 12-hour and Bukit Cinta Ultra. LOL)

The route was a little bit over-distance but I got a reading of 30.90km. Probably from all the detour made to Petronas station lah. 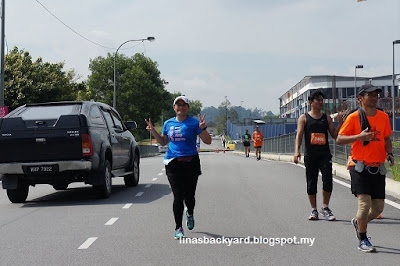 I reached KM25 at 3:58 (iyer, that's almost an hour slower than what I did in 2012!) and it took me 5-hours to finish. Because I was so slow, there weren't any photographers waiting for us slow pokes at the finish line other than my Hubby.

And because we finished after the 5-hours COT (I finished in 5:04), results also tarak. But at least was still given the medal and finisher tee lah. 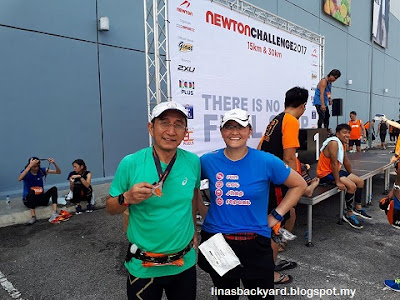 There were no refreshments available at the finish line so after some photos with friends, we went to Old Town Kopitiam for a drink.

All in all, as a friend had said, this was a good LSD route. The event itself was really low-key but we were provided with the important basics - water, isotonic, banana, excellent traffic control and crew (both route marshall and water stations crews) and route markers.

Only thing was, you had to rely on your own GPS watches to know the distance you've covered or ask the crews.

I'm not sure whether there were any post-race refreshments because I know if there was any, it would've been finished by the time I crossed the finish line anyway.

Even when I did it in 2012, watermelons were almost gone by the time I crossed the finish line. Hahaha 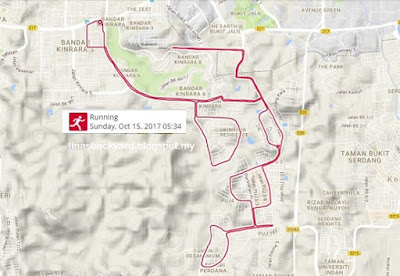 Was it a good experience?

Definitely. I wouldn't have been able to do a 30K on my own at that kind of challenging route myself.

Will I do it again next year. Maybe. If someone sponsor my registration fee. LOL

Anyway, I'll have a very flat route to tackle this Saturday and Sunday at UM24 (it's on UM track) and at Augustman. We'll see how that goes, yeah?

Anyhoo, thank you to all the crews that were so supportive of us runners on Sunday! And don't ask about my rabbit ears lah. Itu sudah retire! LOL

Updates on results and photos taken by Hubby at the finish line can be viewed at Cik Arnab & En Kura-Kura Facebook page. Do LIKE and FOLLOW us!
Email Post
Labels: Events Itchy Feet Race Recap