After running 5.25km in ASICS Relay Run on Saturday night, it was a 10K run the next morning at Tayaria Run.

The "boutique" run was held at Quill City Mall which was a nice change for me, from the usual Dataran Merdeka/Padang Merbuk venue.

There were a few runs held around KL during the same morning and even plied part of the same route, so the Tayaria Run organiser had to change the flag-off time to 7am for 10K and 7.15 for 5K runners. 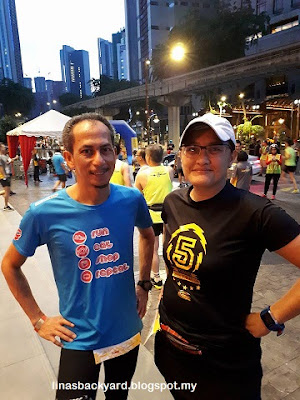 It may be a "small"ish kind of event but the elite runners came in almost full force for this event!

I even met with a fellow GC member who had joined the 10K too. He was aiming for a sub60 finish while I was aiming to just run and finish. Hahaha

A few minutes before flag-off, I decided I'd better go settle toilet visit first and when I came out, the organiser was already doing flag off countdown.

Die. GPS belum on. I ain't gonna start my run if GPS tak on! LOL

Luckily GPS was captured soon enough, because sometimes GPS watches do have issues finding reading around the city area, what with the skyscrapers and all. 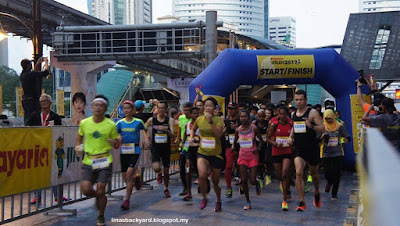 I was somewhere at the very back lah, as usual.

The organiser had earlier reminded Tayaria participants to not stop at another race's water stations which also used part of the same route we were using but barely 1K into the run, I could see a few Tayaria runners stopping for a drink at the other race's WS. Adui. 1K already thirsty kah?

Another runners asked me what distance we were running also. Another adui.

Most of the route was coned off and traffic control was quite good. However, I do wish there were more route markers (yes, I know the route is pretty straightforward) and also a few distance markers. Knowing some GPS watches will have haywire reading when running in town, distance markers would be really helpful.

Good thing my Polar's reading didn't go off that much as I got a final distance reading of 10.20km for Tayaria Run.

I did thought my watch reading already went haywire upon reaching KM3 mark because at that moment, I was running under 20 minutes. I felt I was doing a slow and easy run at pace 8 or something.  Even crews at one of the WS hollered and told me to run faster. LOL

Tayaria's WS was located at KM3.5 (my watch) so I figured Polar went off by 500m or so because the organiser did announced that WS would be located 3km apart.

I skipped the first water station and had thought to stop at KM6 WS. So by the time I reached KM6, and no WS in sight, I felt a bit drama already lah. Hahaha

Around KM5 onwards, I was running behind a lady wearing a white tee. I wasn't looking to pangkah her or anything but whenever I caught up and ran side by side her, she'd sped off then slow down until I caught up with her again.

It was rather funny as I felt she somehow didn't want me to run in front of her. It went on a few times.

We finally reached the next WS which was located at around KM7. Thank god! I took a cup of mineral water and ate one barley mint sweets before starting to run again, and this time, the white tee lady didn't catch up with me.

There were construction around the area and the road got busier so we had to run on the pavement for a bit until we turn right towards Kampung Baru.

You know you're near to the Finish Line but the watch only read 8km by this point and that can be a bit mental. Hah hah

I had been running rather steadily all this time (around 7min pace) but when we turned into Jalan Raja Bot, I got a bit lazy and decided to take a walk break. So hot summore dy.

The  route was rather flat but I don't really like flat route. Haha 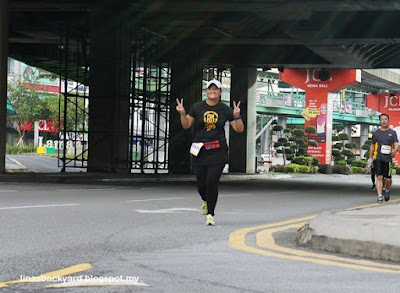 Then finally, I was approaching the Finish Line. Yeay!

Crossed the finish line, collect my goodies bag, my nasi lemak, apples, kuih ketayap and mineral water before I went to look for hubby.

He was sitting at a curb, taking photos of runners finishing. 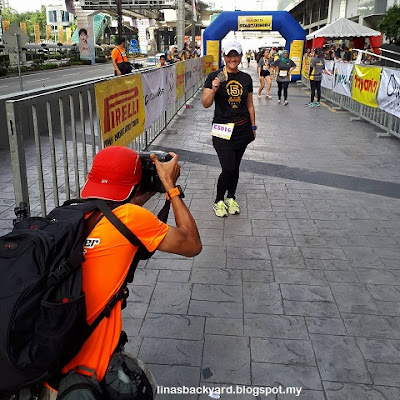 Later, got photos taken by the official photog. 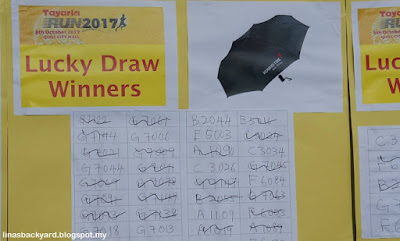 I didn't win any grand prize for lucky draw but still win an umbrella that morning. Hehehe 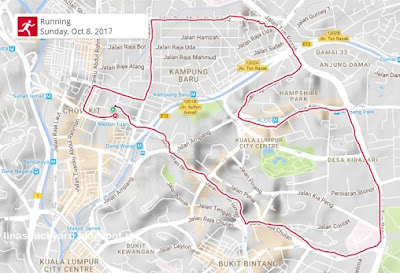 The route of Tayaria Run. It was a nice change for me. Part of the route was familiar as I had run it during SCKLM. But during SCKLM, I ran through the route pre-dawn and on Sunday, I got to see the route in daytime.

All in all, a nice and fun morning for me.

With only 3 hours sleep the night before, I replaced my sleep afterwards with a 3-hour nap after lunch. Hihi

Some photos taken at Tayaria Run can be found at Cik Arnab & En Kira-Kura Facebook page. Do LIKE and FOLLOW us for race photos and updates!
Email Post
Labels: Events Itchy Feet Race Recap