Running With Style, In AugustMan Run 2017

There's a whole lot of comment from runners on why AugustMan Run is held in October and not in August since the name implied the eight month of the year. It's because...

Do you know what it means to be an august personage?
It means to be venerable and eminent. Inspiring. Dignified.

And it's also the name of the magazine, AugustMan which is billed as the definitive men's style journal, for the globe-trotting, cosmopolitan man who covets success and the finer things in life.

The magazine held their inaugural road race event last Sunday, on Oct 22nd 2017 and it was flagged off at Lot 10. A really nice change from Dataran Merdeka or Padang Merbuk as race venue, I would say.
And here I was, just hours after completing my 6-hours run at UM24 for dunno do what and with some "orang kuat industri and idol" and also the editor-in-chief, Rubin Khoo. 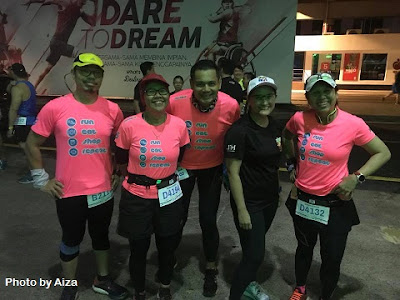 There were a few members of my Gaited Community kakis running in the event and we gathered before the start line early. Alas, my gastric-prone tummy was still making problem (I purged twice after finishing UM24. Bluergh) and had to dash to find a toilet less than 10 minutes before flag-off. Adoi! That and with the chafing caused by the UM24 run, it wasn't a pretty situation for me. And certainly not dignified or inspiring. Hahaha

I was still in the toilet when Negaraku was sung. Double adoi. 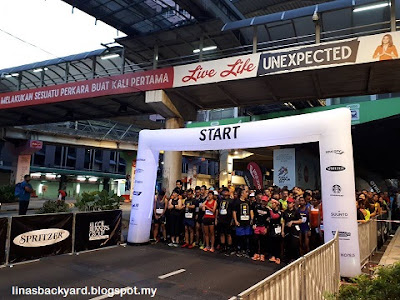 There was a pretty decent crowd running in AugustMan Run despite the many clashing road races held on the same Sunday, not only in KL but all around Malaysia. Truthfully, I was lured into joining by the fact that we ladies get extra finisher goodies than the men. Each female runner also received a pendant from e-Suen! So cool!

I couldn't say much about the race itself because like the RD said, I "curi ayam" in the race. LOL

There was only one distance offered in AugustMan Run 2017 and that's 12K for Men & Women Open and Men & Women Veteran. But with syiok prizes for podium placing up to 15th placing.

However, for safety reason, slower runners who can't make it to a certain checkpoint at an allocated time were instructed to make a turn and shortcut.

That's why you see some slow runners/walkers finishing right with podium runners. But fret not, those "curi ayam" had their bibs crossed by the crew. I'm not sure whether they'll receive their medals but I didn't take mine.
From whatever that I could see, the run was well managed and organized. I collected my race kit on Friday and it was a pretty easy experience as I took MRT to get to Lot 10 and the MRT entrance/exit is right beside Lot 10!

There were plenty of crews at junctions and bike marshalls too. And friendly abam traffic police too! Hehehe

Post race party was fun. Each runner received post-race snacks of banana, watermelons (which was in a nice individual pack) and nasi lemak. There were Red Bull promoters around too, serving cans of Red Bull.

For me, I have to thank the magazine and organizer for giving me & Hubby the VVIP Passport to join their party and that's where we head to, after the run. Hehe

All in all, it was an interesting weekend for me. And still surviving with less than 2-hours worth of sleep!

But I wouldn't dream of missing the AugustMan Run 2017 and just had to be there.

And oh, their goodies bag is quite decent too, you know.

Some photos taken at the race can be viewed at Cik Arnab & En Kura-Kura Facebook page.