A few months ago, when the registration for ASICS Relay Kuala Lumpur opened, Team Marathon Company asked whether I'd be interested to run as their team member and I immediately said yes (without really looking at my race calendar).

I had joined a few of The Marathon Company's events (Ice Watch Light Up The Night Run, Boh Trail Run, Coway Run...) before and had run in Putrajaya Night Marathon wearing their team t-shirt so I'm honoured to be asked to join them again this time.
The Marathon Company sent two teams - Team A which consisted of really, really fast, elite runners (you have Awan, Yazid, Farid and Tinie in the team) and Team B who are also fast (with me somehow sesat in the team. LOL)

There are two distances offered - Marathon and Half Marathon, with categories for Men Open, Women Open and Mixed.

Both teams Team TMC A & B entered the half marathon, mixed categories and each of us needed to do 5.25km to make it 21km in total.

Our team member Dzeti had helped collect our race kits earlier and we were supposed to meet her up around 6pm near the race venue on the race day itself. But after spending the whole day outside (even somehow managed to follow a fun run route for an event in UM that Saturday morning plus celebrating Hubby's niece's birthday), we only managed to arrive at the race venue after 6pm and met her after Maghrib. 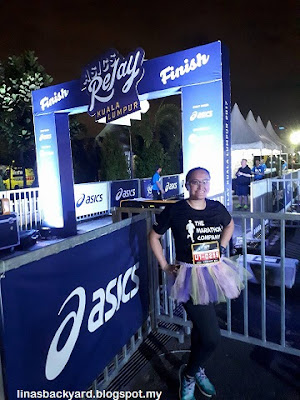 Some team members had agreed to wear tutu by SummersaultMY to run in the relay and I did too. Hehe

I was actually supposed to be the 2nd runner but at the very last minute (read, 1min before flag-off, I changed my bib from 2nd runner to 1st runner) and had to literally shove fellow runners who are crowding the start line just to start my run as I was still not ready when the relay was flagged-off. I actually shoved two crews too, who were walking leisurely in front of me when I was about to run! LOL

Not really sure what to do (our first runner couldn't arrive in time), I was lucky a crew quickly spotted me and passed me the "baton" which came in pouch version.

All that panicky mode made for an elevated heart rate and I ran with my heart rate pounding.

The route was well secured, with traffic cones placed along the 5.25km route and it is rather a flattish route. But that didn't stop me from resorting to walk breaks at Jambatan Seri Gemilang. Sorry teammates!

There were two timing mats along the route plus one at the transition. Two water stations were placed along the route, at around 1mile mark and at KM4. Half marathon relay runners didn't really need the WS stops but the full marathoners who needed to do two loops of the same route would need them more.

As I arrived the transition area, I saw my teammate and quickly handed the pouch to him and made my way to the hospitality tent where Hubby was waiting for me. He had no idea we had changed runners order. 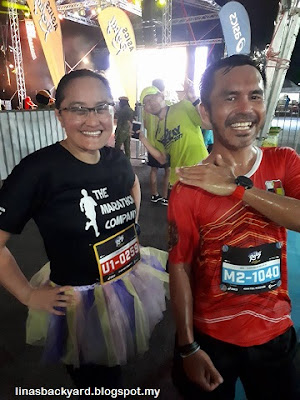 Bumped into a few friends, outside and at the hospitality tent while we waited for our team members to finish their laps. 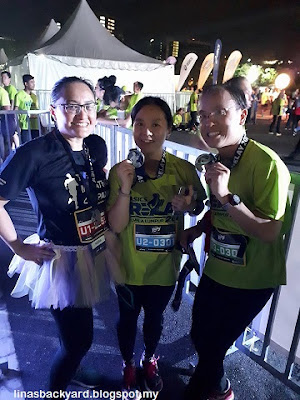 Also met with new friends, such as Jin who has been really supportive of Cik Arnab & En Kura-Kura Facebook page. 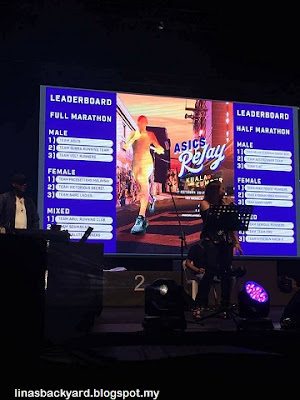 There were food trucks, rodeo, bouncy castles at the race venue and even live performances. On the stage, the organiser had alternated between showing promo of other countries' ASICS Relay and the race leaderboard.

I love it that one of the organiser's sponsors gave away bottles of Pocari Sweat freely and this is one isotonic that I can drink (another one is Aquarius but not made for Malaysian market punya). 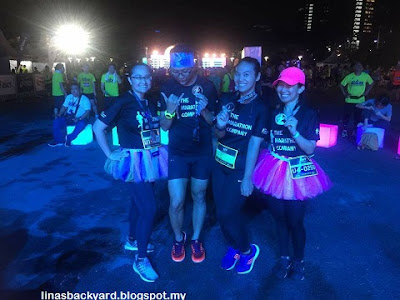 It was great fun and we lingered for a bit for team photos and whatnot before heading off. Hubby and I need to get back early(ier) as I had Tayaria Run 10K to run the next morning.