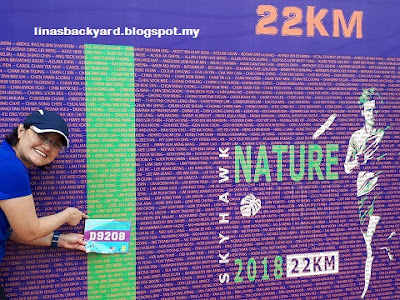 I was back to Melaka last weekend to run in the 4th edition of Skyhawk Nature Run.

I've been joining the race since its inaugural race back in 2014. The first run was very much a boutique run with the number of participants capped at 500 pax or so and now it has grown to a run with close to 2,000 participants and all running 22K!

Yes, Skyhawk Nature Run only offers one distance and that's 22K. And that makes the run rather special to me. Apart from being able to run in Melaka lah. 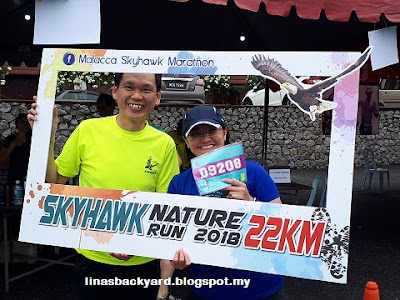 Skyhawk Nature Run is organised by a running group called Malacca Skyhawk Marathon Club and with a bunch of runners organising and volunteering in the race.

It is also noteworthy to know that RM5 of participants' registration fee was donated to Kiwanis Down Syndrome Foundation (Melaka Centre) and a total of RM9,300 was collected from the registration and the organiser rounded it up to RM10,000.

Although I had enjoyed the previous editions of Skyhawk Nature Run, I always seemed to have some  private drama or other in getting myself to Melaka to run in it so I was hesitant to join this year. But Dr. Liau (photo above) contacted me about joining the race and I didn't hesitate saying yes to him. (Although I was still worried there'd still be drama for me going to Melaka. And there was. Ahahah) 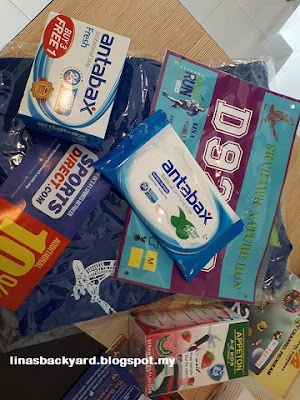 I met Dr. Liau again during REPC and got my race kit in a breeze.

Hubby dropped me off at the race site at around 5.20am and first order of business was queuing for the toilet. Ahaha

Flag off was at 6.00am and was done with a bang. Complete with fireworks wor...

I started way at the back and with the bigger crowd than in previous years, I walked for about 500m before the crowd cleared a bit and I could start running. No biggie since my intention was to run easy that day.

Cones were placed along the route and marshals on bicycle and motorbike plied the route to ensure runners' safety. They repeatedly reminded runners to keep left and not run in the middle of the road. Unfortunately, I observed quite a number of runners who either ignored or quite oblivious (due to wearing earphones and such) to marshals instructions.

Most drivers were quite patient that early in the morning except one irate "Pak Haji" who got down from his car to confront a RELA member who was manning (and stopping cars to let runners pass through) at one junction. Kikiki

We ran for almost 10K before making a turn into Kampung Tiang Dua and that's where one of the WS that I look forward to was located. 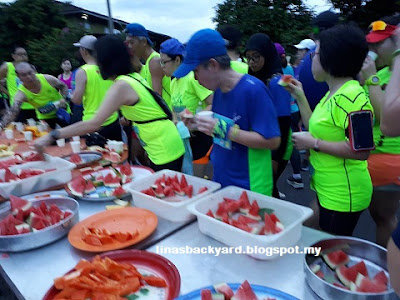 Water stations (WS) were placed for about 3-3.5km apart and the one located at KM10 in Kampung Tiang Dua offered fruits. Lots of them too!

Just like previous editions, earlier runners who arrived at this WS were also given a cap!

I had maintained an easy pace 8/min effort for the first 10K and was happy that I reached that WS in 1:19.

But then I spent more than 5 minutes here, eating fruits and taking photos. Hahaha

The route now was through small kampung roads and it was really nice and we runners didn't really need to bother about traffic at all.

RELA members still plied the route checking on us and helping some injured runners by sending them back to the finish line on their bike.

There was a huge Singaporean group of runners who came to join this run, apart from 18 other nationalities and they had fun taking photos along the kampung route.

I still maintained my 8min pace and reached KM15 at 2:05 (plus the extra 5 minutes due to the makan buah stop at WS3). Still OK la. I also did stop occasionally to take photos and whatnot.

A temple located along the route had allowed participants to use their toilets so a number of runners used the facility.

This year's route was very kind to runners and the inclines we had to tackle were quite tame. For someone who got kinda lazy training, it was such a huge relief. wakaka 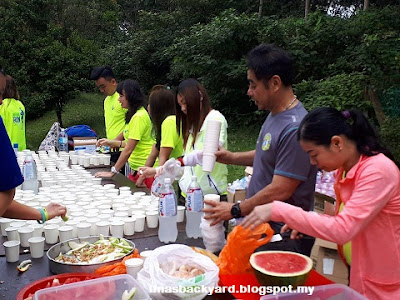 Then, at KM18 we were greeted with another WS with fruits. 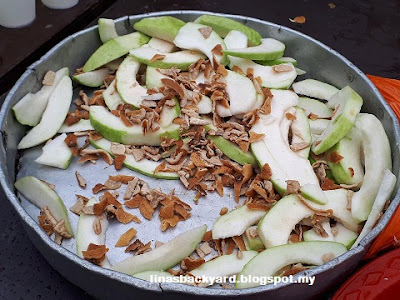 We were not only served water and isotonic and fruits like watermelons, we got guava with asam limau too! Syiok to the max, I tell you. 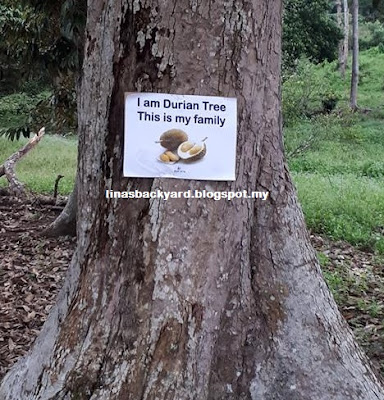 All along the route, the organiser had put up some signs for encouragement and also cute signs like the above. I also saw one for cocoa tree and another for palm oil tree. Educational for city runners! 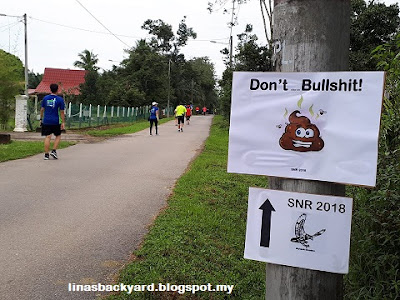 Later we were reminded of bull shit.

And this particular stretch had some booby traps runners had to avoid. LOL

There were also "Welcome to SNR" signs and in several different languages late towards the run. The organiser had put up welcome signs in languages of all the participants of Skyhawk Nature Run! Runners from 19 different countries participated in the run and they were greeted with the welcome sign in their own language. Cute. 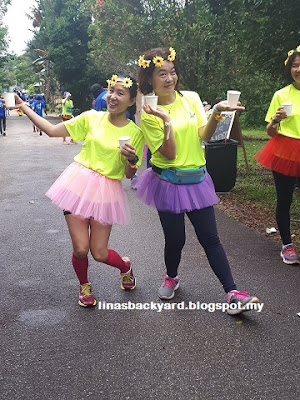 A friend was volunteering at WS7 and the last WS. It had a Hawaiian theme of sorts there. Complete with bubbles and photo booth! I had promised her we'd take photo together but it ended up being me taking her photo and then she took my photo. But no photo of us together! *face palm*

I enjoyed running along the route and enjoying the nature and fresh air so I couldn't understand why some runners had no qualms throwing rubbish by the roadside instead of throwing them at the rubbish bin that the organiser had placed near the WS. I saw a few and got pissed off at one "Semut Runner" couple who threw a scrunched up assortment of papercups, banana peel and a Gardenia bread wrapper right in front of me that I had to go and ask them "Takde tempat lain nak buang sampah ke?"

But of course la they didn't seem to be perturbed much with being chided by me. Huhu

It was a pity that some runners (one threw a water bottle right across the road, aiming for the longkang) had this kind of attitude because Skyhawk Nature Run promotes cleanliness and a green environment. And this is MELAKA. You know Melaka has the tagline "Don't mess with Melaka" right?

I had maintained an easy 8min pace for 20K (not counting the two 5 min each stops at WS located at KM10 & KM18) but I got lazy after that and my pace dipped to 9min after that because I started walking.

But whenever I saw photogs, I ran lah. wakaka

And there were quite a number of photogs at Skyhawk Nature Run. So nice. 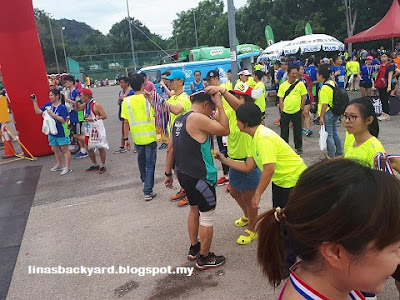 I saw Hubby (who had returned to the hotel after dropping me off earlier, ate breakfast and then came to take some photos for me) about a hundred metre before the finish line.

I slowed down for photos before crossing the finish line in an awesomely slow timing. Wakaka

It was nice to be greeted by volunteers who draped medals to our neck just as we crossed the finish line. Not all races/runs do this and by doing it (some gave it still wrapped in its plastic wrapper and some make you go queue for medals elsewhere), it makes runners feel  more special, in my opinion. 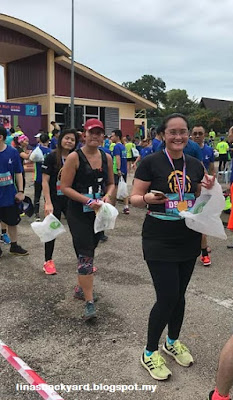 Got my medal and I joined the queue for goodies. Volunteers handed out plastic bags to runners and we used to collect our post-race makan goodies.

I got Warrior energy drinks, Mamee biscuits and snack, Mr Potato potato chips and there were freshly cooked food being served too. 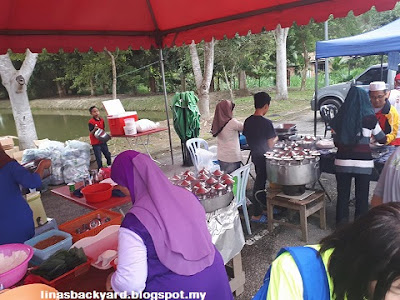 I got hard-boiled eggs and there were pulut panggang, kuih ketayap, putu piring and putu bambu!

And afterwards, I queued for Milo lah.

Really, really syiok to the max. 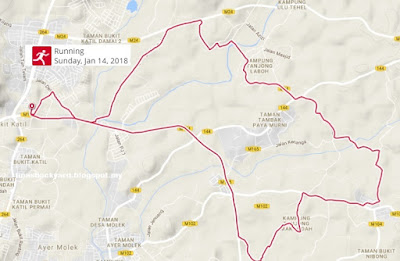 Quite easy and no killer incline.

This is one of the most highly recommended run and the one that I always enjoyed joining.

Thank you to the organiser, crew, volunteers, photographers and runners for such a great run.

Some photos taken along the route by me and some taken by Hubby at the finish line can be viewed at Cik Arnab & En Kura-Kura FB page. Do LIKE and FOLLOW us for future race updates. ^^
Email Post
Labels: Close to my heart Events Itchy Feet Out and About Race Recap Travel - Melaka