Let's see...
We're approaching November soon. Two months left before we enter the year 2015!
I can't help to review and look back at my running activities and to plan for next year's. ^^ 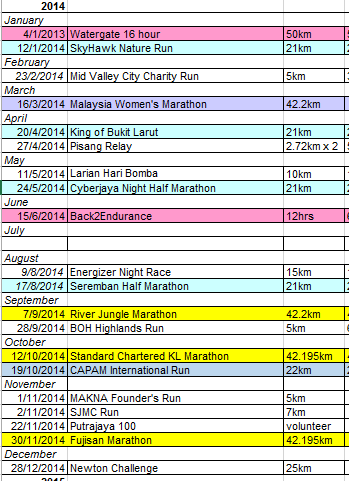 So these are the ones I did and will do in 2014. Only 18 races registered and I plan to register for the Newton Challenge as part of training at the end of December.

Rather an eclectic mix of distances ran this year, some I did alone, a few I ran with hubby and a few I did with the family.

This was errmmm... somewhat an improvement from last year. I registered for 25 races in 2013! 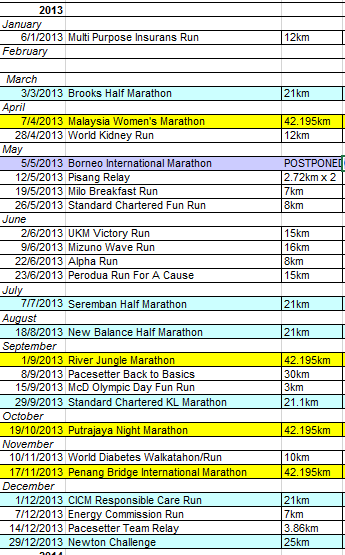 25 races sure cost me a pretty penny! It really was a bummer when I can't run in some of them (what we call a DNS) due to race postponement, commitment or injuries.

I can be rather prone to want to run in races for the company and for the crowd and sometimes that made me register for races on a whim, provided that it fits in my training plan.

Like the CAPAM race that I registered 2 days before the event, just because I need to run 21K that Sunday in accordance to my training plan and I didn't want to do it alone. So, bye-bye RM60.00 Hahaha

Anyways, I've registered for 2 races for 2015 so far.
One, in Melaka. In January.
Another, in Sabah. In April.

Hopefully, I won't succumb too much to temptation and suddenly have like, 29 races next year! *finger crossed*
If you ask me why I need to register and run in races; well, the answers are :

I'm looking forward to run with Son this Sunday at MAKNA Founder's Night Run in Putrajaya. It's a 5K fun run.

Then, the next morning; Son & Hubby will do a 3K run at SJMC run and Mommy a 7K.