I have to admit, I have been tirelessly (or some would say, rather tiresome) in posting about the Standard Chartered KL Marathon 2014 and all that blog updates came to a finale on Sunday, Oct 12th when Kuala Lumpur was swarmed with 35,000 runners. It's a sight to behold and an experience to cherish. 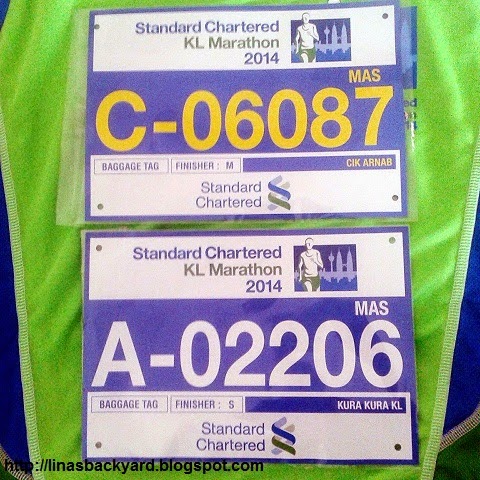 Both hubby and I ran in the full marathon category. A month plus after our full marathon in River Jungle Marathon. Kinda suicidal since we hadn't had much mileage a month leading to this Standard Chartered KL Marathon (SCKLM) apart from a hike to Nuang a day before my birthday, a 5K run at BOH Highlands Run a week after that.

I only managed to do a few short runs ranging from 3-5K last week and no mileage at all until the marathon. Hahaha Adoi.

Anyways, we just plan to run and finish. Well, we did, didn't we? So, yeay us. LOL

Flag-off was at Dataran Merdeka, and at 4.30am for Full Marathon category and it was a reverse route from the previous year. Instead of heading down to Brickfields, we headed towards Jalan TAR and on to Jalan Sultan Ismail.

Couldn't help noticing hotel guests (at Renaissance Hotel) and clubbers along the route "harassing" volunteers and some runners for making them stuck and not able to drive through. Didn't these business owners get the memo about road closure and made the announcement accordingly to their patrons?

Anyway, it was mostly flat route for the first 9K before we entered AKLEH. Both my Timex GPS and hubby's Polar reading went a bit of haywire when we were running in the city centre, I guess due to the high-rise buildings.

Subuh was when we got to KM8'ish and some runners stopped at the Bomba Station at KM9 to perform their Subuh prayers. SCKLM had put up prayer tents at KM11, and some runners had kindly donated some kain pelikat and kain batik for runners to use there. Thank you! Banyak pahala uols. :) 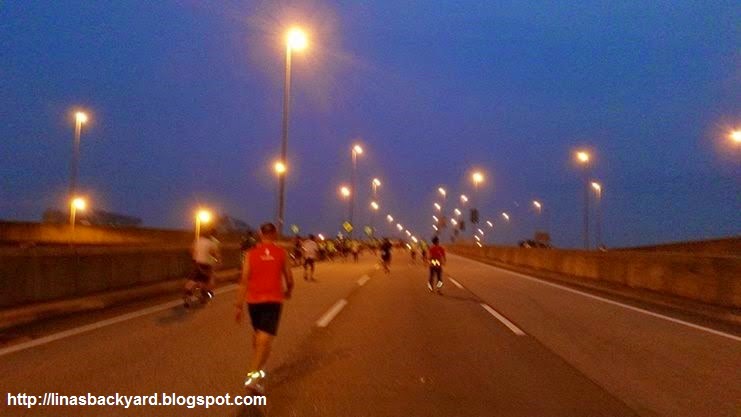 We had an easy plan. Reaching AKLEH, we'd walk the incline and run on the flats and declines. We needed to keep a conservative effort, seeing that neither of us had much mileage this time. 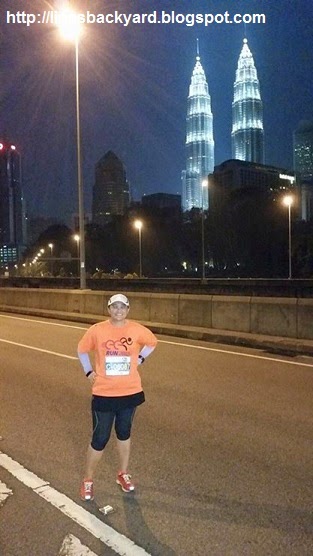 The route before the u-turn had a really magnificent view of the twin tower. I was really tempted to keep on stopping and take photos of the tower but didn't take that many as I didn't want to get left behind by hubby!

But I ran while enjoying the view of Kuala Lumpur skyscrapers and it was such an awesome experience. When else do you get to stop along AKLEH, stop and soak in the view instead of just driving pass, hurriedly? 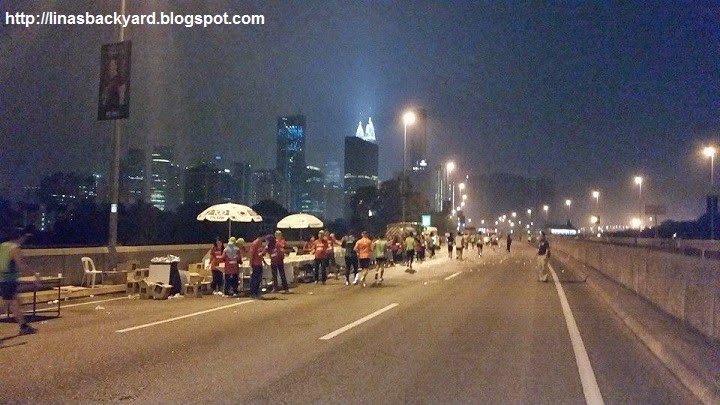 One of the water stations on AKLEH. Runners taking over the highway! 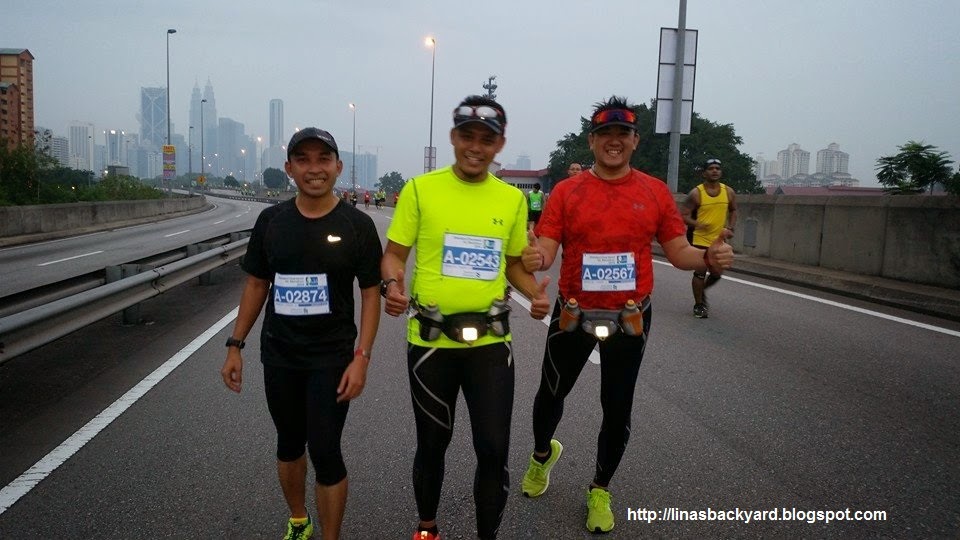 Friends who overtook me at KM14. The rest was already far in front too, I guess.

Congrats guys on your VFM!

It was here that hubby got a bit of stomach issue after he ate a power gel and he started walking. I was foreseeing a boring stretch ahead and didn't want to start walking so I asked him whether I should keep a lead and keep pace.

He told me to go ahead and meet him at the finishing line later.

I kept a lead, fully expecting that he'd catch up and maybe take the lead at around KM30. With that in mind, I ran ahead and stopped at each water stations from KM14 onwards while making sure I can see him catching up behind me.

When I reached KM18, I suddenly thought of aiming for a sub6 timing so I tried making sure that I'd get to each water station at KM18 and KM20 at a certain time. I did and was stoked about it that I think my second 10K was faster than my first 10K.

It was after KM20 that we started to enter DUKE and I couldn't help laughing (what else can I do?)  at the sight of the steep flyover that we needed to run up to, to enter DUKE.

I tell you, AKLEH and DUKE sure give you an undulating experience! 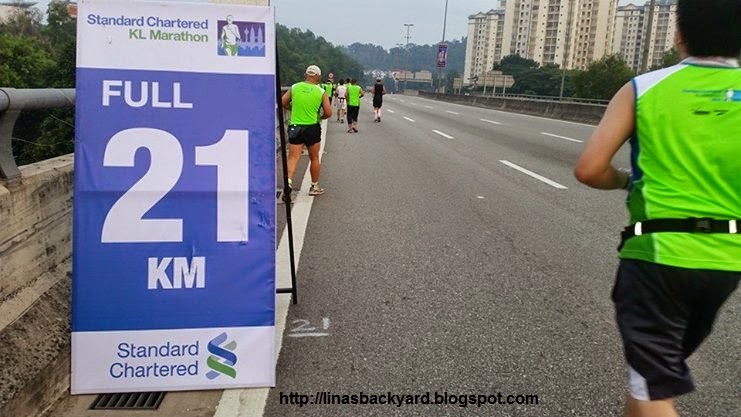 Got to KM21 mark at around 2:47.  Good, because it was under 3-hours. Though I had to remind myself that it'll be hard work to maintain that same timing for the balance 21K but hey! No harm trying! Hubby arrived at the KM21 around 3hours.

I had actually started to get hungry at KM20 mark. The whiff of food cooking when I pass the Gurdwara Sahib Ampang sure made my tummy rumble.

But alas, no solid food and only drinks (water and isotonic) served until we got to KM27(?) and we got our hands on some powergel. I don't normally take gels, but I was hungry so I took and downed the Kona Punch Powerbar gel served there. Good thing it wasn't funky tasting or anything and my tummy didn't protest.

Rule of thumb : don't take anything new during your marathon in case it doesn't agree with you.

Perked up a bit with the power gel and also seeing a friend waiting on DUKE to give us runners some cheer and taking photos. Appreciate it, Kam! ^^ 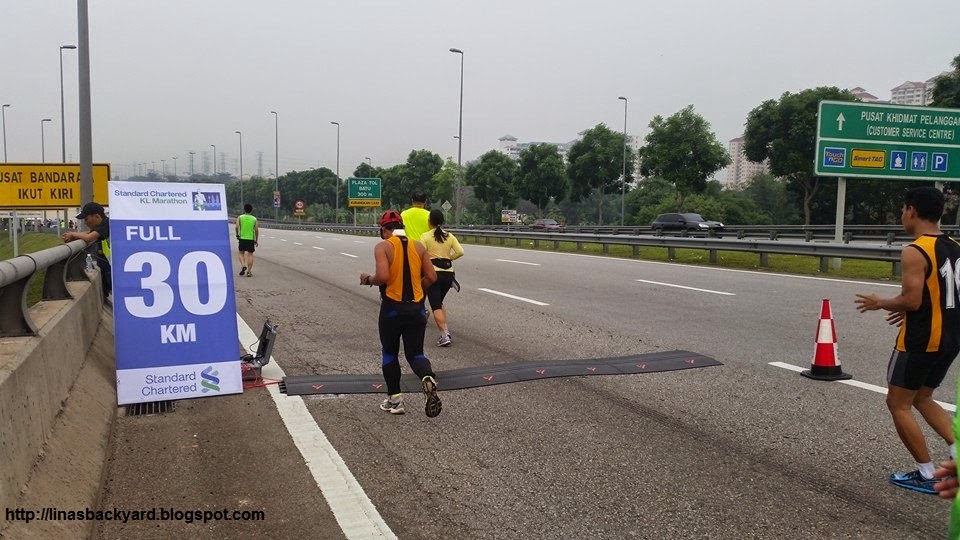 Couldn't believe I was still feeling relatively good and I guess it must be the very conservative pace I was keeping.

By this time, I kinda lost hubby though. I waited for him for a bit but didn't see him so I told myself that I'll wait for him at the finish line if I can't see him catching up. 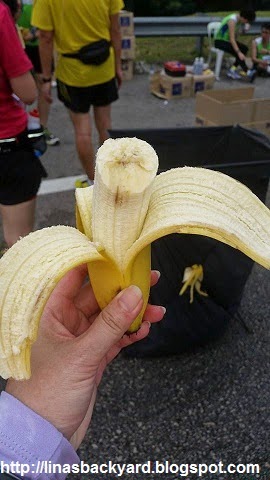 It was at the KM30 water station that I got to eat.

Actually, this was my first banana ever eaten while running in a race. I usually didn't have the appetite to eat but that morning, I was so hungry; I devoured this banana in no time.

Feeling rather full, I only ran slowly after leaving the water station and walked up another incline. Then pretty soon, we were leaving DUKE and out to the busy Jalan Kuching. Skipped the KM31 water station only to be greeted with these familiar faces opening an independent water station for us!

I was so happy seeing them, I was waving to them like 50m from where they were waiting. Hahaha 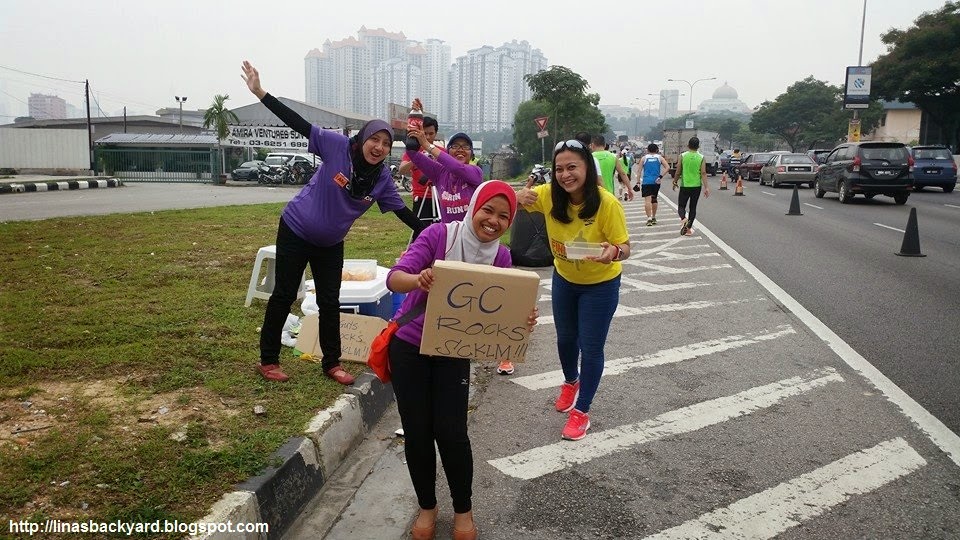 Thank you all for being up, waiting and serving us countless fruits, chocolates, coke, root beer and even karipap for us GC runners (and others too). I heart you!!!

Then off I went again. Jogged a bit until we reached another ascent. Then walk lor. It's back to walk incline (which was a lot at this point onwards) and run declines. Flat was slow jogged.

Saw more familiar faces taking photos at the cooling arch near the tennis complex in Jalan Duta. Thank you Lini!

And from there onwards, it was Bukit Tunku! BUKIT! 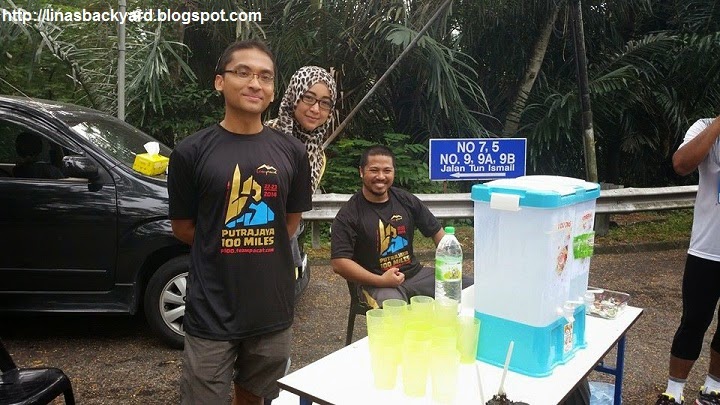 Of course I stopped here.

The watermelon was a godsend. Sedap. ^^

There was a decline afterwards and I slowly jogged down. By this time, I realised that with about 8k left, a sub-6 timing wasn't gonna happen but I still want to finish it in a decent time so I coaxed myself to run whenever I can and speed-walk on the inclines.

Actually, I wanted to run. It's much faster to finish if I run instead of walking, right? 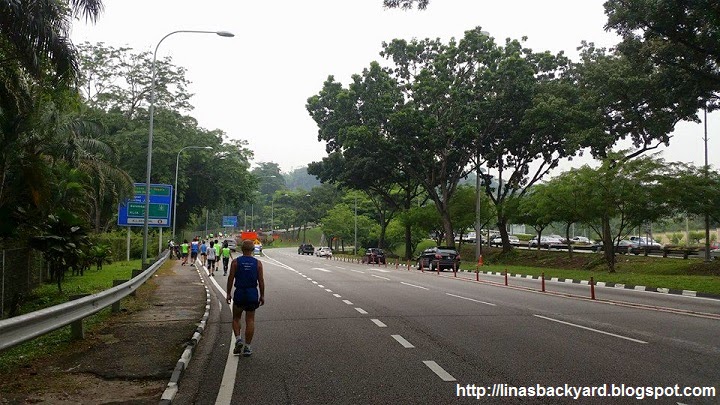 Along the road next to Lake Garden. More incline. Huh. Hahaha

After another jog/walk from here until Majestic Hotel, I made an attempt to run. Like, run.

I didn't get my sub6. It wasn't my PB either. But I have to say, I really enjoyed my run.

I had fun! And that's what's important for me. Though I guess I need to train smart to prepare for my Nov marathon. That one, die-die must do sub6 or get sweeped and not be able to finish my marathon! Alamak! 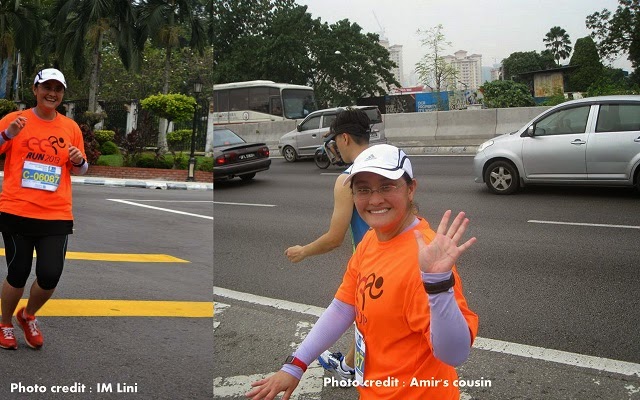 Of course can smile, if one runs at my slow pace. Miahaha 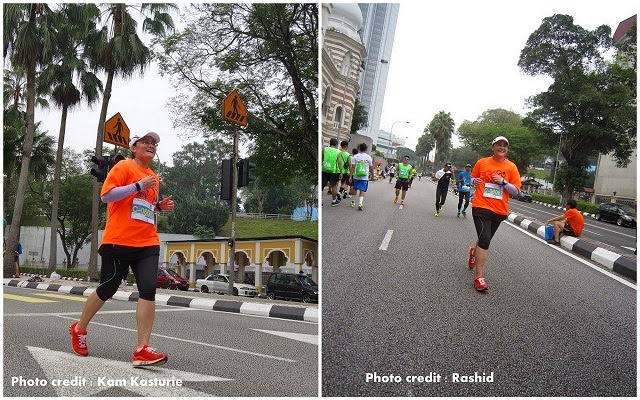 A hundred meter towards the finishing line, taken by Kam and Rashid. 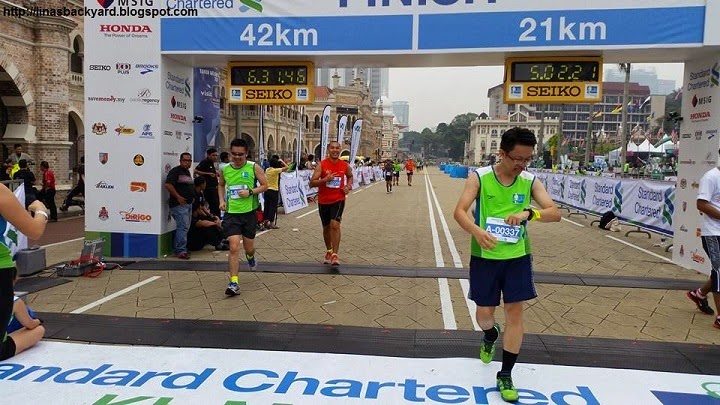 After crossing the finish line, I waited for others and took some photos and of course waited for the fella in orange vest to finish. Congrats hubby.

Crazy fella who had much less mileage than me leading up to SCKLM.

What can I say? We both cari pasal this time. Huhuhu 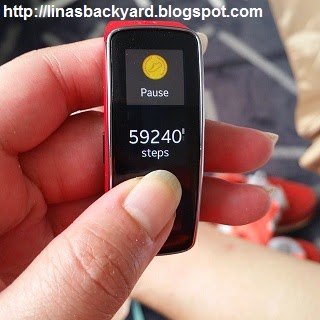 All in all, I had loads of fun today. Sure, some section was boring but that boring section was where I'd actually tried to push myself to run instead of lingering or wasting time walking. So boring route makes me run. There were plenty of inclines which made it tough too. I'll just have to do more hill training to not be afraid to tackle them next year.

Thank you to the race organiser, to the awesomely enthusiastic race volunteers, hardworking cleaners who were sweeping our cups tirelessly fellow runners and all the supporters. You are all GREAT!

It was also a nice feeling to run a local marathon and see a big crowd of runners in front of me and behind me as opposed to seeing a few of them like I used, in other marathons. Almost 6,000 winners toed the start line today, after all!

Congrats to all of us!
Email Post
Labels: Close to my heart Itchy Feet Race Recap Travel - Malaysia