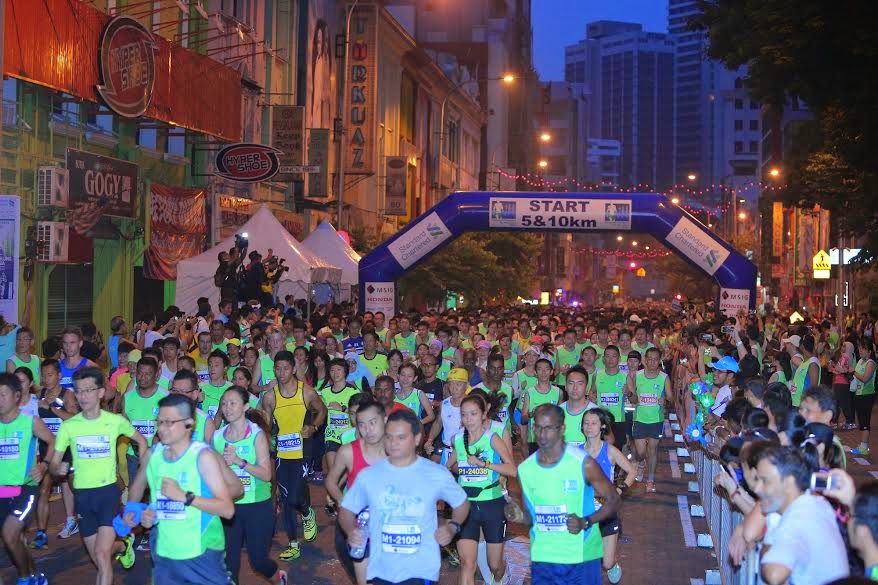 Kuala Lumpur, 12 Oct 2014 – After another impressive race, the Standard KL Marathon 2014 proudly announced its winners for its sixth installation today. 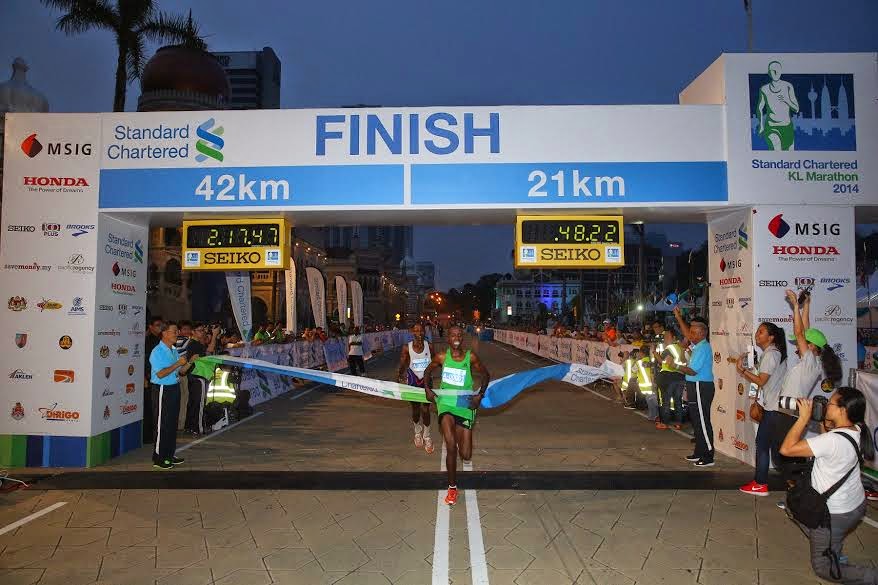 Kennedy Kiproo Lilan and Mugo Hellen Wanjiku, both from Kenya were named champions with respective times of 02:17:47 and 02:43:22.
Expressing his excitement, Kennedy said, “I am very excited for my personal achievement at the Standard Chartered KL Marathon today, despite the rather challenging new route. But what mattered most to me was that everything turned out great in the end, and I am very thankful for that.”
Meanwhile sharing her joy, Hellen said, “I am very thrilled because this is my first Standard Chartered KL Marathon and I won the race! I have been overtaken several times but I kept pushing myself until I crossed the finish line, and the feeling was surreal.”
The Full Marathon Men’s Open category took home the first runner-up medal with a time of 02:17:48 which went to Geoffery Birgen of Kenya, just ahead of Chelimo Luka Kipkemoi from Kenya with 02:18:45. Demes Alemtsehay Mesfin from Kenya was the second to cross the line in the Women’s Full Marathon with a time of 02:43:59, while Ruth Chemisto Matebo finished third 02:44:32.
Malaysian Full Marathoners were not far behind with Muhaizar Mohamad earning the Full Marathon Malaysian Men’s Title and Loh Chooi Fern taking the Malaysian Women’s category with a time of 02:41:11and 3:25:52 respectively.
Both the male and female Malaysian winners for the Standard Chartered KL Marathon 2014 are part of the Dirigo Atheletes Development Programme which aims to develop a corp of world-class running talent within the country.
At the press conference with the winners, Rainer Biemans, Director of Dirigo Events, owner and organizer of Standard Chartered KL Marathon said, “The runners have really taken to the challenge of the new route and we’re delighted with how the route has worked out for them.  It’s a good shift for us and for them in keeping the race fresh as well as challenging.”
A 16 per cent increase from the previous marathon, the prize package offered this year amounted to USD 116,740 (approximately RM376, 524).

This year, the Standard Chartered KL Marathon introduced a new route for the event. Some 35,200 runners took off from Dataran Merdeka and Jalan Tunku Abdul Rahman throughout Race Day. The new route took runners to the some of the busiest highways of the city namely the Duta-Ulu Klang (DUKE) Highway and the Ampang Elevated Highway (AKLEH). 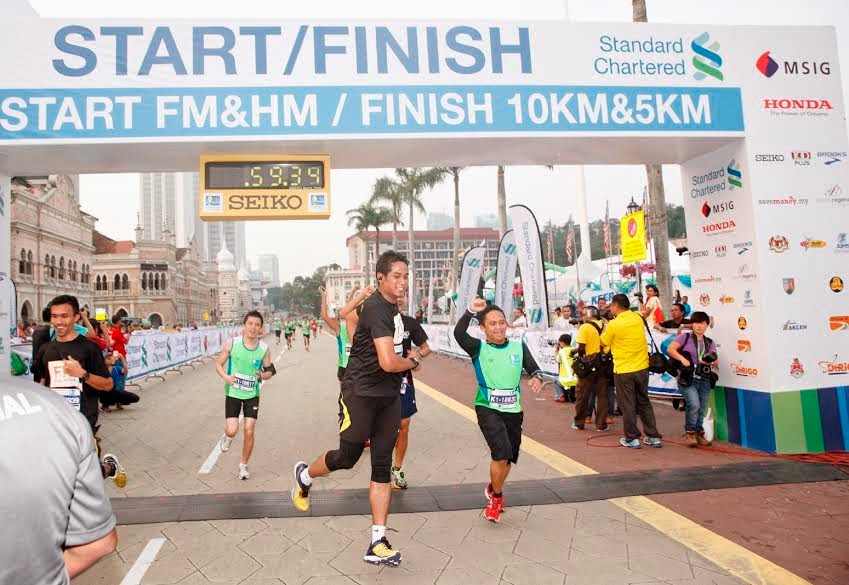 In support of the event, the Minister of Youth and Sports Malaysia, Y.B En. Khairy Jamaluddin took on the 10km Speed category. Khairy successfully completed the race within one hour time frame, setting an outstanding example to the Malaysian public.
“The Standard Chartered KL Marathon 2014 is indeed an impressive and well planned event. I am happy that I am fit enough to join and finish this event. Training for this race not only requires discipline but as the tagline for this year’s marathon goes – Committed. Confident. Courageous. Recently, I have launched a programme called Fit Malaysia which aims to drive Malaysians to lead a healthy lifestyle and for Malaysia to be a sporting nation one day. The Ministry of Youth and Sports and its agencies support these kinds of events and I urge all Malaysians to take part in various sporting events such as today’s to maintain a healthy lifestyle,” said Khairy.
Organised by Dirigo Events, the Standard Chartered KL Marathon 2014 is made successful with the support from title sponsor Standard Chartered Bank Malaysia and gold sponsors including MSIG Insurance and Honda Malaysia. Official partners of the event are Seiko, Brooks, 100 Plus, Pacific Regency and savemoney.my. Suppliers of the events are Salonpas, PowerBar, Repucom, 2XU, Swim Bike Run Magazine Malaysia, GP Batteries
The event is also co-organised by Kuala Lumpur City Hall (DBKL) and Ministry of Youth and Sports Malaysia. The Standard Chartered KL Marathon 2014 is sanctioned and supported by Malaysia Athletics Federation (MAF), Federal Territory Kuala Lumpur Athletic Federation (FTKLAA), International Association of Athletics Federations (IAAF) and Association of International Marathons, Distance Races (AIMS).
List of winners :