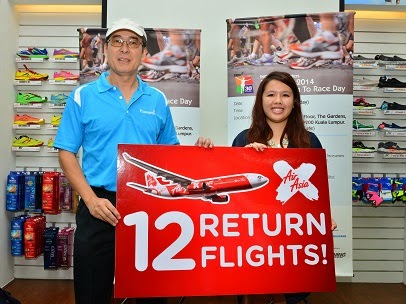 The Pacesetters Athletic Club announced AirAsia X as the Platinum Sponsor and Official Airline of the INOV-8 Pacesetters 3030 Run 2014. AirAsia X will be giving away 12 free return flights to 12 destinations in Asia and Australia with a total value of RM35,760.00.


PAC’s vision and aspiration is to be the leading running club in the country and region. To achieve this, we will organise three events that aim to be “best in class” in the region. The INOV-8 Pacesetters 3030 Run 2014 is the first of these three events. 2014 is the 30th anniversary of the founding of the club and having a 30km run to celebrate this special occasion would be really memorable. There are 10 marathons and several more half marathons in Malaysia, but there are no 30km events. This is a boutique event and provides an opportunity for those wanting to test their readiness for the full marathon. For seasoned marathon runners, this is a long run that is essential for their marathon preparation”


INOV-8 Pacesetters 3030 Run 2014 is to be flagged off at Padang Merbok. Runners will get to experience some of the finest run routes in Kuala Lumpur, running through leafy Kenny Hills and Sri Hartamas. They will be well catered to, with 13, 8 and 3 drink stations on the 30km, 20km and 10km routes respectively.


“Our club’s tagline, ‘Setting the Pace Together’ will be printed on the finisher’s shirts. The INOV-8 Pacesetters 3030 Run originated from a 30km training run organized by runners for runners many years ago. We hope this event will inspire other running clubs in the country to have their own events in their towns. We have a vision of a circuit of runs organized by runners for runners across the country. PAC will provide the lead in co-ordinating a series of runs by running clubs in 2015.” concluded Wan.


AirAsia X Chief Executive Officer, Azran Osman Rani said, “Sports sponsorship has always been essential to AirAsia X as it brings communities together and we are X-cited to be part of this event that encourages Malaysian to recognize their potential in sports and run for a healthier life. It is also our privilege to realize the dreams of deserving winners of this run to go further and compete in other international running events happening in AirAsia X’s destinations with the sponsored return flights.”


This is our sixth 30km event and it is made possible by title sponsor INOV-8 in partnership with event owner and organiser, Pacesetters Athletic Club. Garmin is the official fitness watch, Running Malaysia is the media partner and Nelson Franchise as bronze sponsor of the event.


With all 8 categories opened for registration since 16 July 2014, the event has garnered good response from runners. The organisers targeted to get 3,000 runners over the 3 distances - 30km, 20km and 10km. The registration will close on 20 October 2014 or on reaching 3,000 entries.
Email Post
Labels: Events Itchy Feet