A First Timer At A Dualthon Team Relay

My first taste of Powerman Dualthon was in 2013, when I went kepoh-kepoh at the event and gave support to participants. The 2013 Powerman was also the first dualthon event I ever witnessed firsthand.

Fast forward to 2016 and here I was, a participant of Powerman. But as I don't own a bike, I registered for the Classic Relay Category with a cyclist, Hui Jane.

My teammate and I decided to enter the Classic category and I would be doing both the run leg instead of finding another teammate to do the second leg of the run. 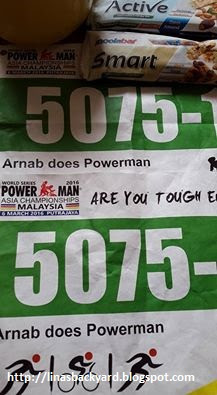 Two bibs under my name, as I'm running twice. ^^

After the Twincity half-marathon small "fiasco" where I ran the whole route with only water and isotonic as fueling, I was careful to eat a light breakfast this time.

A cup of coffee and a bar of Moolabar (raisin and almond, which is my favourite) before we head out to Putrajaya.

I later ate two more Moolabars while waiting for my teammate to finish her bike section as I got a tad hungry, before starting the second leg of my run. 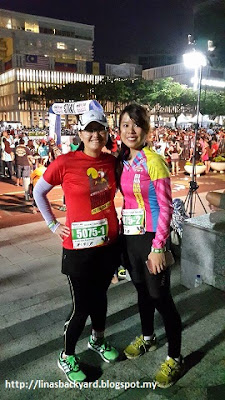 For the first run leg, I did the 10K with a conservative effort. I just followed the crowd, mindful not to be too fast and fade out later. I have a second run to do later, after all.

At around 1K mark, two running friends came into sight and I decided to try follow their pace. I ran with Shuhaimi and Azril two weeks ago when I tried the Powerman route with them leading the way so I know they have a pretty even pacing. 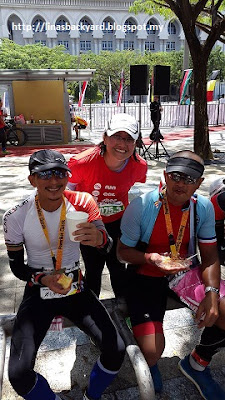 Shuhaimi and Azril. They did the solo Classic category and I was happy I managed to tail them for a bit  during the first run leg. Congratsssssssss both!!! 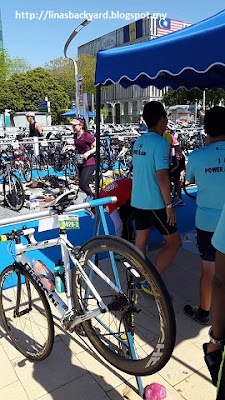 Finished the first leg in 1:10:20 (inclusive transition time) and head into the transition area where my teammate was waiting for me. I handed the ankle-strap timing chip to her and off she went and I had about 2 hours to rest and mooch around before she finished the bike leg and for me to start running again.

Started the second run leg at 10:37am with the sun already high up and shining brightly. Taking account of the heat, I only aimed to not be slower than a 8min/km pace for the second 10K. 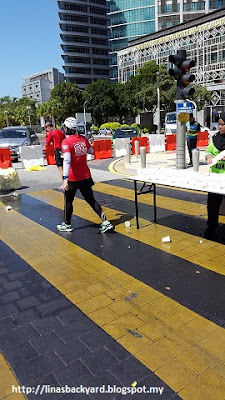 Aid station offering mineral water and isotonic were placed at a 1K interval for the running route which may seem quite unnecessary for the regular runners out there and I actually only stopped twice per loop during my first run leg. But after the sun came out, that 1K apart aid station was a godsend! Not only were there water and isotonic, cold sponges and bananas were available too and each aid station was amply stocked for participants. *thumbs up* Though not too sure why Zapple and that green F&N drink were served at one of the aid station... (because no coke kot).
The second leg of the run was slower for me, of course. I was happy to finish it in 1:15:56 but maybe I can finish faster next year if I join again. yeah? Not likely to join the solo category (can't afford the bike and not disciplined enough to to train cycling) so we stick with relay lah. Hihihi

Overall, the race was good.
Love the volunteers.
Traffic police and RELA good too.
Thank you for spending the Sunday under the hot sun for us, Powerman participants!

And congrats to everyone who participated and finished! Power!!!