SALUTE all participants who toed the starting line and did their best and challenge themselves that day. 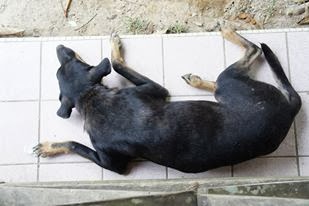 While the humans went out braving the heat, the Gunung Nuang residents dogs knew better and chose to "lepak" on the cold tile under the shade instead. The dogs are the clever ones. The humans are crazy! Hehehe 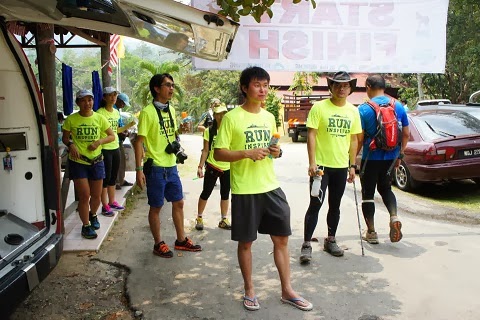 Crew/volunteers at the checkpoint & marking station, from LYN runners. 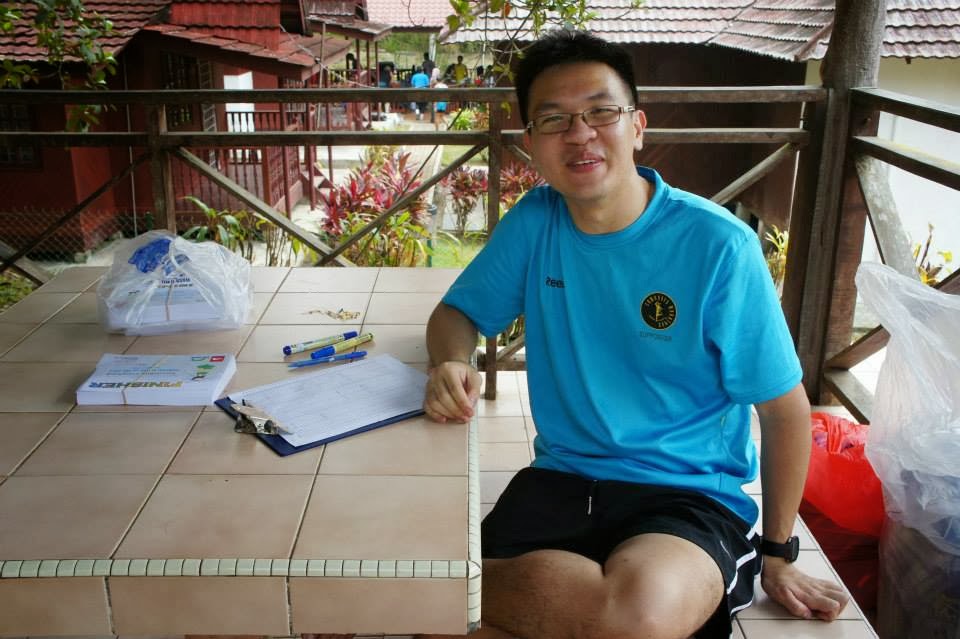 The smiling "guru besar". He's the one to see for timing. He also would try to poison encourage runners to at least do another loop. 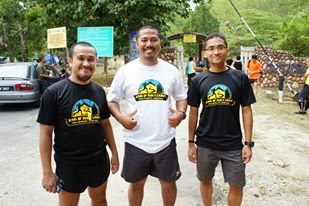 The people of PACat Adventure Team. Look for them if you guys wanna run King of Bukit Larut in April. #freepromotion hihihi 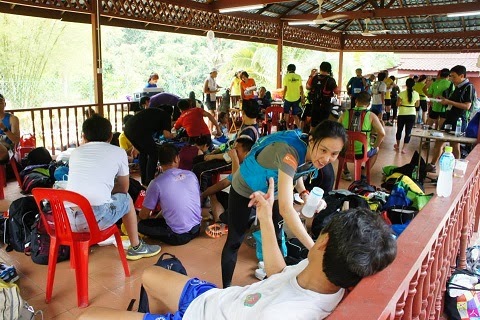 The official refreshment area for runners. Both hydration and fueling are important for endurance sport like the Gunung Nuang Ultra. A little bit of rest help too.

The Sabun Group also had an unofficial refreshment area to any runners who required anything to drink or eat and even sejadah to perform prayer.

After mucking about at the start line, Zaini and I decided to hike up to the next checkpoint and turn-around point at KM5. It was so darn hot, and starting our hike at 1.00pm;  wasn't exactly a breeze. Wonder how all those runners who had been doing 5 hours+ run coped. WoW!

We had nothing to offer to the participants other than words of encouragement like "good job" or "looking good" (yeah, yeah... neglible contribution) and took their photos a bit. Despite the obvious fatigue (from the heat and distance covered), most were cheerful. *thumbs up* 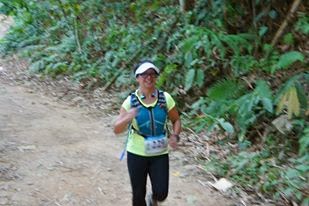 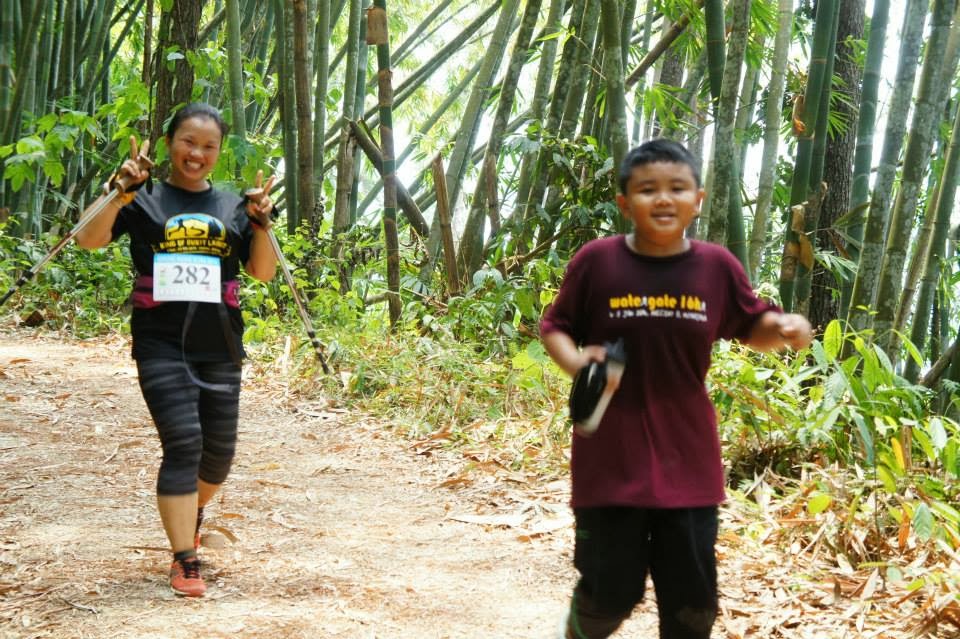 After almost reaching the CP, it drizzled. We hurried up and made it in time to take shelter there before a heavy downpour.

A blessing, the rain. It cooled down significantly and actually, I was very glad to be standing in the rain and cool down. I imagine some of the runners felt the same way too, judging by how nonchalant they were drinking and filling up their water bottles in the rain. ;-)

After "lepaking" at the CP for around 40min, chatting with participants who were resting there, we decided to make our way down but not before ensuring our gears (especially the camera) were safely tucked in under the plastic cover of our hydration bag.

Runners were still going up and down the route and most looked determined to at least get the 50K minimum under their belt.

We arrived at the Start/Finish line at around 4.00pm and hung around waiting for participants especially friends to finish. 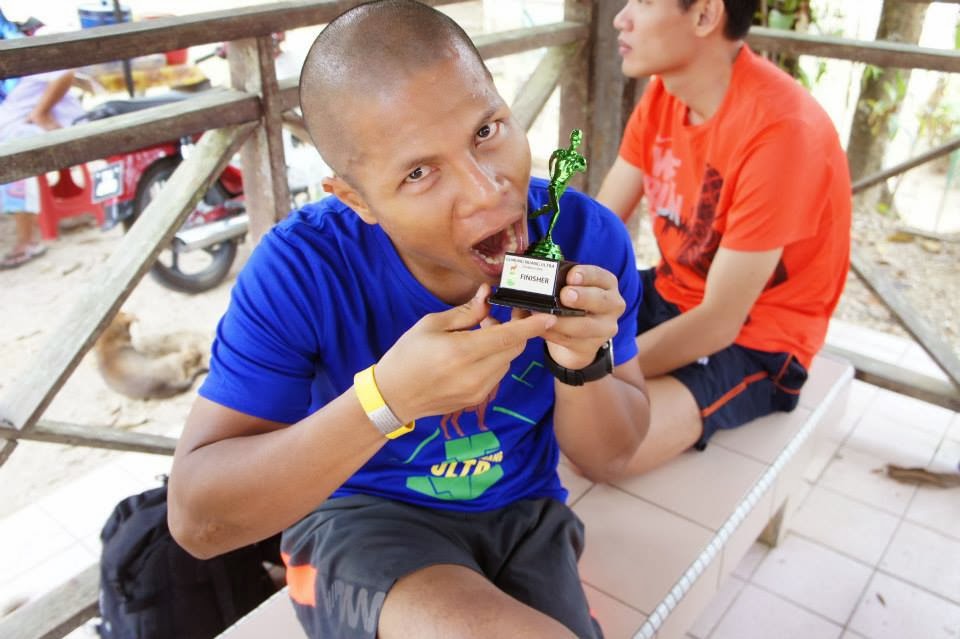 Finish run, get the nice blue mountain goat finisher tee and trophy. Khairi with his precious trophy. He did 50K in 8hours 28min. Fuh!

Then, when friends started to arrive at the finish line after doing their 50K (most stopped at 50K); I went around hugging people for shameless photo opp with them. LOL 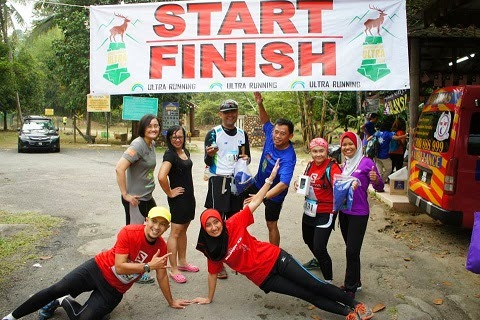 Crazy people. Did 50K, still wanna do side plank? HAHAHA

We hung around until the cut-off time of 6.30pm and made a move after making sure all our friends had crossed the finished line.

Our utmost respect to the participants of this event. You guys (& gals) RAWK!

Same goes to the organiser and the crew + volunteers too.

If you want to see the results, click here.
The photos that we took, click here.
Email Post
Labels: Close to my heart Itchy Feet Out and About Race Recap Travel - Malaysia Travel - Selangor