The Energy Commission had organised their Energy Efficiency Run (EE Run) since 2011 but I myself joined it for the first time in 2013. I wanted to join in 2011 but we were in Japan when it was held that time. Heh heh

The biennial run used to be a free event back in 2011 & 2013 and its registration used to be done manually only, which of course made it a it hard for members of the public to join. I managed to do so with the help of a friend who is working in Putrajaya. Even then, the slots were snapped up quickly!

Just like previous editions, the 1,500 slots for this year's run were snapped up within 3 days! EE Run 2017 is still the cheapest run in town, with the registration fee of RM20 for 10K for public. This came with the ease of registering online, bib with timing chip, event tee, finisher medal and goodie bag.

But unlike previous editions which were held at the end of the year, this year's edition was held in April.

The run saw participation from members of the public, government sector staff, residents of Putrajaya and also students. 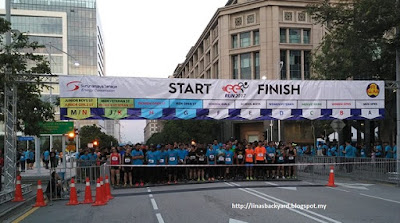 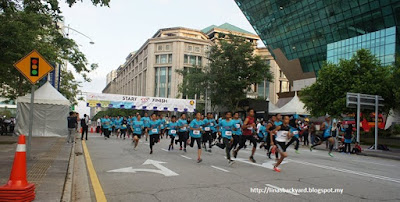 I bumped into a couple of running buddies before the start and a few said hi along the route. Chatted with them while I run for a while before they sped ahead.

I haven't been running this week and with so many eating sessions during the weekday, I didn't expect to do a good timing but I told myself that I'd just run.

I did that and didn't even glance at my watch until I crossed the finish line.

Turns out that I did quite well (went too fast even) for the first 8K before resorting to walking at the u-turn at KM8 point where we had to run uphill. Pancit la. Hill. Heat summore. Hahaha

As I already did the 2015 edition, I knew that we'd encounter one last hill about 500m long at the final stretch. Suffer dei. And that stretch was littered with photographers!

There were two water stations along the route at KM3.5 and KM7 thereabouts but I only stopped at the second water station. Overheard a runner asking for 100-Plus but both water stations only provided mineral water.

The first 3K was a fast one because it was a downhill and it was undulating from KM4 onwards. Apart from the start at the Suruhanjaya Tenaga (Diamond Building), the route was a pretty standard route for races in Putrajaya so we knew what to expect. But still, despite knowing that, the uphill section at KM8 and then at KM10 sure killed me! LOL

Got my finisher medal, mineral water and goodie bag upon finishing my run and then I joined Hubby who was taking photos of the runners.

After enjoying cups of cold tea provided by the organiser, we made our way home but not before making a detour to Balai Bomba Bukit Jalil to collect my racekit for Larian Bomba 2017 held on May 6th, 2017.

All in all, its a good, no-frills run.

I certainly will be back in 2019, God willing.
Results for EE Run 2017 is already up at: Checkpoint Spot