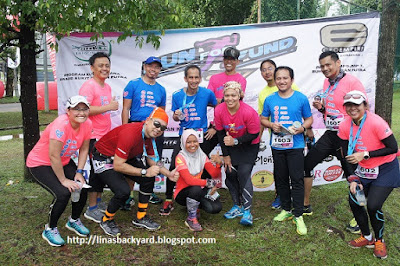 Run For Fund 2017 is a fundraising run for Bukit Rahman Putra mosque and GC friends had joined to show support of our friends who live in the neighboring area. 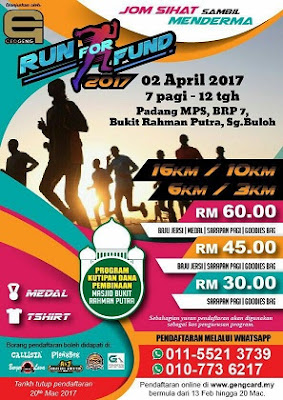 We get to meet each other, run to raise fund (for a mosque lagi) and get to spend it doing a healthy activity.

Unlike other runs, fees for Run For Fund is based on what entitlement runners choose, regardless the distance.

It's great because those who doesn't want medals can opt out from getting one. 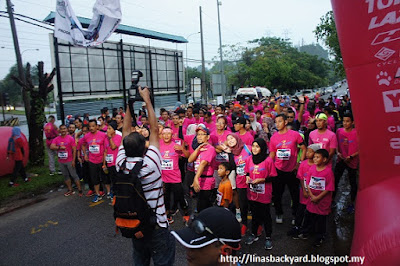 It was still drizzling when we arrived to Padang MPS, Bukit Rahman Putra and flag-off was delayed a bit to wait for clearance from marshalls.

I started my run with a few GC geng, and with what I felt a conservative pace. I was still unsure about running 16K as I actually feeling very malas and I only needed to do a 1.6Kx4 not 16K! LOL

So, I just ran taking care not to look at my watch except for the few times I glanced at it to check the distance I had done.

I was rather surprised seeing the first water station when I just reached KM1.70. I suppose the water station is placed there to cater for the 3K and 6K runners. Three crews were stationed there, handing out drinks. I opted not to stop early and continued to run. I needed to pee so I don't think it was wise to drink so soon, anyway. LOL

The route was nice and although we ran on a rather busy Sunday traffic for the first 2K or so, there were marshalls on bikes patrolling the route. The road wasn't closed off for traffic and it was quite worrying to see some runners running in the middle of the road, with nary a care.

As the crowd started to spread out and as we turn into the kampung area, traffic was almost non-existent and it really was route to run.

Some of our GC gang had zoomed ahead and for a while, I couldn't see anyone in front of me. Luckily, there were ample route markers placed alongside the road to guide us. Marshall were stationed at a few junctions to help guide us. Alas, there were no distance markers to guide runners who might not have a "canggih" GPS watch.

I finally reached the second water station, which was placed at KM7.30; and dunno why, opted to drink 100-Plus Edge that was served there. I immediately regretted my decision as I couldn't drink isotonic during races and to curb tummy problem, I took a banana there to eat.

The water station was manned by a friendly guy (just him alone!) and we talked a bit and pretty soon, two of my GC running buddies; Zahir & Aiza arrived.

I continued my run and about 1K after the water station, I took an ice cream batang from a crew who was giving it out from his motorcycle! 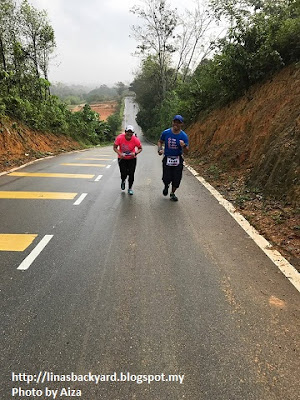 I decided not to suffer needlessly running up some of the hills dished out in the route so I horsed around with Zahir and Aiza there.

Aiza and Zahir then sped ahead while I decided to stop at 10K. They went ahead and finished their 16K run! 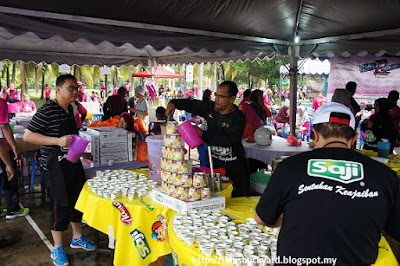 I lepaked a bit at the finish line with hubby, taking photos before making my way to check on the run's breakfast. 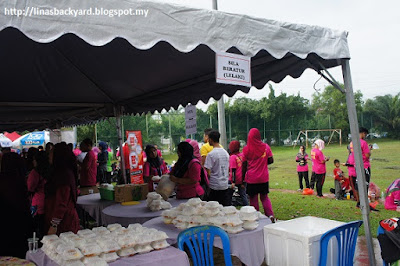 I had prepared to go home early but couldn't resist waiting when I heard the emcee announcing lucky draw numbers for the 10K and 16K category runners. 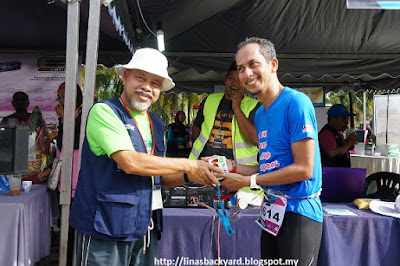 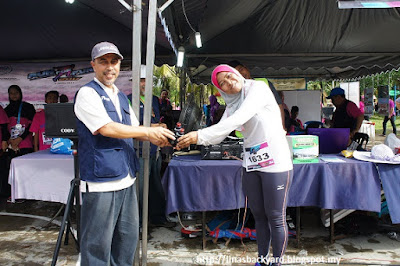 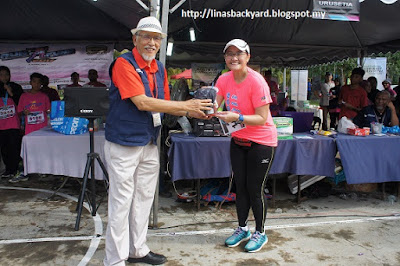 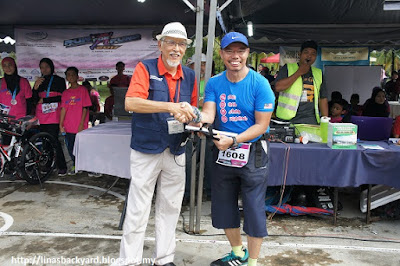 Some of who were quite lucky in winning lucky draw prizes. ^^

All in all, it was a nice event. More than 1,000 runners turned up which is quite a decent turnout.

The weather was nice and cooling. The route interesting.