I was supposed to run in Mid Valley Charity Run (MVCCR) today. Well, that was the initial plan before I had to cancel plans to run 21K at SCORE Run (because I was given a 6K bib instead of the 21K) and Challenge Putrajaya (because the organiser sucks and "postponed" the half marathon event at the very last minute).

With Standard Chartered KL Marathon (SCKLM) just 4 weeks away, I decided to ditch MVCCR in favour of attending SCKLM running clinic's final session instead. I need both the mileage and the hill training. Can you believe that I had less than 100K mileage for April?

So Hubby dropped me off at Taman Bukit Jalil Park before heading off to Mid Valley.

I arrived early and had about 35minutes before the session starts so I decided to warm up by doing a loop first. Plenty of other clinic participants were doing the same, as most need the mileage at this peak time in our training plan.
Met these two GC ladies after finishing my loop and chatted a while before the flag-off and they sped ahead in front of me.

I managed to do 6 loops but I was 13 minutes over the cut-off time of 2 hours to complete the final loop. No sweatlah. The main thing, I did all my loops plus an extra one before the flag-off for a 19K mileage.

I saw Hubby as I was into my 5th loop as he came after finishing both the run at MVCCR and also queuing for all the goodies at the run. 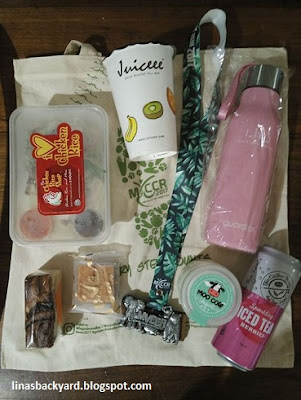 His bounty for the run.