Off To Conquer Kiara Trail 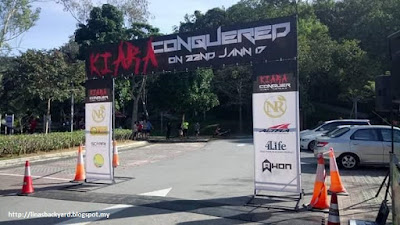 I joined the Conquer The Trails@Kiara last Sunday as a volunteer and not as a runner. Volunteering and crewing at races is something Hubby and I occasionally do to support the running community and as a way for us to give back to the community. Plus it is interesting to be on the other side of a race too. 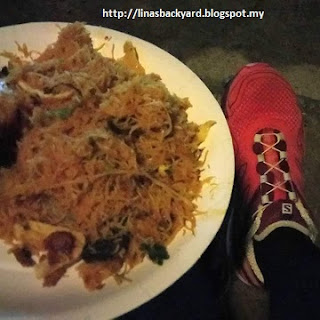 We reported to duty at 3am on Sunday morning for race briefing (that's like waking up and reporting to run a full marathon wei!!!) but first order of business was for us to eat. The organiser was really nice in taking care of us volunteers.
﻿
After having a very early breakfast, it was roll-call and briefing time before we head off to our respective stations.
But not before being reminded to "tapau" food for our own consumption to eat while on duty and get our bottled drinks too. A few of the volunteers at a couple of stations were reminded to take extra water bottles for runners although they were not manning a water station. "They will understand why after seeing the station" was how the organiser put it. Must be on top of a tough hill lah... Hahaha 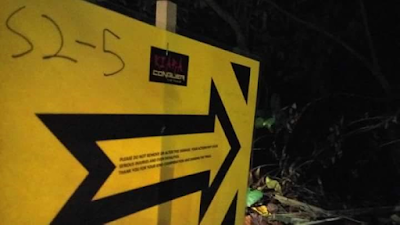 My station. Hubby's station was further in the trails, after mine.
There were already runners and joggers running the route where we passed as early as 5.00am and by 7.00am plenty of them had stopped by and asked about the event that is going to be held.
Before the flag-off and because we arrived at our station early, I used the time to walk up and down the hilly route. Walk only lah, not running. Off-season mah. HAHAHA
The race was flagged-off at 7.30am so by 8.00am runners were already approaching my station. The last runner to arrive came two hours after the flag-off and after the sweeper came, I took off the sign and head back to the start/finish line. Just as I was about to pack my stuff, ini monkey grab my food pack and ran away with it. Adoi!
With nothing else to do, I decided to help out distributing medals to runners who had finished. 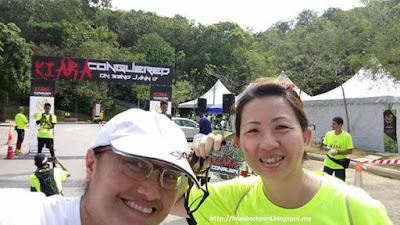 Look who I bumped into at the finish line.
And I was asking her where Anay was. How come Anay wasn't running with Lecthumi, dei???
The organiser didn't impose a cut-off time for the race as he said to just let all participants finished it so although the programme was to end at 12.00pm, we were still waiting for runners even after 12.00.
It was a nice experience for me as a race volunteer. Plus I met plenty of my running buddies too, those who were participants and those who joined as volunteers/crew too.
For participants of Conquer the trails@Kiara, results are already out at : Runners Unite website.
Congrats and well done!
Email Post
Labels: Race Recap