The Tale Of Twincity - My Marathon Start For 2017

Another chapter of My Tale of Twincity.

I did the half-marathon category last year, and finished with four minutes off my target. Despite not meeting the target, I was pretty happy as it was the start of my half-marathon training for 2016. 2016 race recap here.

I had high hopes for my first marathon in 2017. But I was also nervous. The last marathon that I did was at Park Marathon in Dec 2015.

But sometimes, things are just not meant to be. Even when you've been training hard and looking forward to your race.

I'm not sure what went wrong, but as early as 3K, I felt tightness at the back of my neck. And dizziness. Then nausea. I brushed it off and ran steadily, passing the 6-hour pacers.

My target pace was rather conservative as I wanted to hold a 7:50 pace for the first 30K and then I planned for a positive splits of 8:00min ++ pace for the balance.

At KM6, reaching the 2nd WS; I was actually doing an average pace of 8:00. Slow. A friend at the WS hollered: "Marlina, go run faster!" Hahaha

I grabbed a cup of Lucozade (in the end, that was the only cup of Lucozade I drank throughout the run) and continued. Instead of feeling better, I felt worse. My head and neck felt tighter, I was trying not to puke and my legs felt heavy. Friends kept passing me and saying hello. One guy was so cute, he even shook my hand. ^^

Approaching KM11 and getting towards the 3rd WS, I was already walking and two friends from my running group, Gaited Community (GC); caught up with me. Izam look worriedly at me, offered bread and drinks but I declined. I told him that I'd stop at the WS and do an assessment whether to continue or call for medic's help.

And I stopped by the roadside, sat down, tried to loosen anything that I can loosen. Took off my compression socks and rested. I had a few options.


I finally decided to start walking again. Sockless this time and I was hoping fervently I won't get blisters. Not running. Running made me wanting to puke and I'd get dizzy. I actually walked until I reached KM17. By that time, I saw both the 6:00 hour and 6:30 pacers passed me. One of the 6:30 pacers gave encouragement to keep running and I was screaming "can't you see I'm not feeling well!"  in my head. Hahaha Emo.

I saw the ambulance passed by a few times and later saw a pacer with her pacing balloon cut off getting into the ambulance. Temptations. But I stupidly slogged on.

At around KM18 I felt better and I started to jog and managed to do so until KM20. Then continued jog/walk until KM30.

At this time, I had only one banana from one of the earlier WS and mineral water. Apart from the Lucozade that I had at the 2nd WS, I skipped drinking isotonic drinks at all other WS as I was afraid I'd puke or have tummy discomfort. It was CICM all over again but worse (because I was doing double the distance this time).

Bumped into Izam again at around KM20 and he gave me encouragement as I just grimaced. Another friend, who managed to finish in an awesome sub5 timing, hollered from the other side of road as he had made a u-turn and running towards Taman Selatan.

Izam later passed a pack of ice to me at around KM26 and I used it to ease pressure from my neck. Heat, I can stand. But when the whole head felt tight, I suffer.

Nearing KM30 there was a WS that served Nasi Lemak Anak Dara (that went viral months back). I was looking for sponges and bananas but alas, I was too slow for them. No more sponges or bananas. Another cup of mineral water and I continued.

I reached 30K at 4:43 and that is not a pretty timing and I still had 12K to go. At that time, all I could think of was how Hubby would react if I finish way off my target time.

12K to go and all I could do was walk. It was so damn frustrating but I tried hard to keep a cheerful demenaour. Self-pity ain't gonna finish my race after all.

At around KM32, after almost 5 hour on the road, I messaged hubby with "Gonna finish late. Wanna puke at KM12. I just walked all the way".  I tried to run a bit again because I do want to get the run over and done with as soon as I could but nausea stopped me. Blergh.

I bumped into another GC member who was cycling and supporting runners and he offered sprays a few time. I declined every time. The legs felt fine. I just can't move any faster. But I didn't decline when he wanted to take photos! Muahaha

Hizwani, another GC member caught up with me and we walked together for a few hundred metres before he sped off.
Every time my GC buddies offered me something, gel, spray and even ice-cream I declined. All I took was mineral water.
Muka bonk. Hahaha 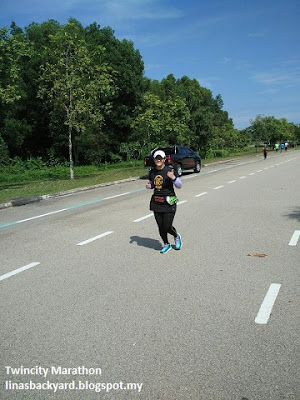 I just kept walking and getting passed by runners, left right center until I passed the last WS at KM41 and forced myself to start running again, nausea or otherwise. I just didn't want Hubby to be utterly disappointed at my performance.

Two hundred metres towards the finish line, friends were encouraging me and asking me what happened as I was so damn slow. Huhu 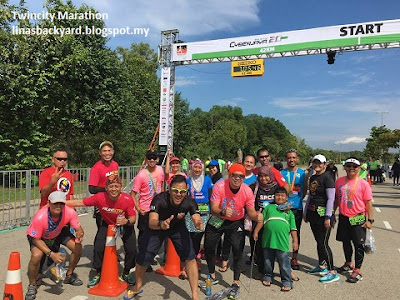 A few hi-5s and with Redz accompanying me and pushing me for the final stretch, I crossed the finish line. With GC members waiting right there. *cries*

Took my medal, got my finisher tee and sat down under a tree to rest. Hubby asked whether I could eat as he wanted to take some fried bihun that the organizer provided for free for runners but I declined. 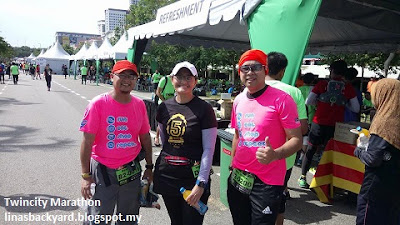 With two of my saviours for the day. Hizwani and Izam. 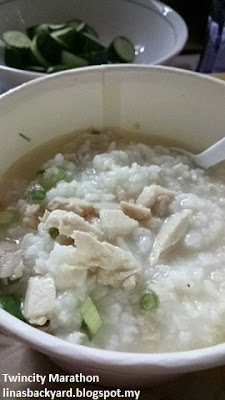 Despite the bad timing, I wouldn't say it was a bad run.

I learn quite a few stuff from the run.
Managed to bump into four soldiers who were doing the marathon in their army gears at around KM24. That was a sight. A very nice sight. ^^

Truthfully, my ego is quite hurt at the timing that I did. Hubby was rather pragmatic about it. He said, after all the "achievements" I managed to do in 2016, perhaps this incident is a way to keep me grounded and not get cocky. I have to agree.

I was 40 minutes off my previous PW and the run was 30 minutes slower than Park Marathon which was a 43K run and almost 1:20 hour off my PB.

Now, I just have to dust myself off, braced for haters and keep on going.

I have a bigger fish to fry and I just have to keep being focused.