I had a few stuff planned for the weekend but as it turned out, I was unable to do any of them due a couple of incidents and emergency meetings.
But it was a blessing in disguise as that suddenly meant a clear Sunday morning with no activities. ﻿So, late Sunday morning the family managed to spend a few hours at Hutan Simpan Ayer Hitam in Puchong.

And thank goodness I didn't register for the Skyhawk Nature Run in Melaka. I really wanted to do it, for the third time but decided not to. Otherwise I would've been rather sad at missing it. Hehehe 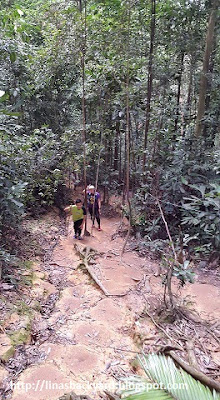 We arrived to the forest reserve at around 10.00am and a number of hikers were already on their hike back.

We did two loops. First loop was the usual loop that Hubby and I used to do for training early last year and the second loop was the waterfall loop.
It was worth the trek to get to the waterfall, as witnessed by Son's happiness. ^^
As we started late, by the time we got to the waterfall (the legal one, not the off-limits area by the way) the other hikers were packing up and leaving.
We had our lunch there, after our swim and there was just another group and a guy at the waterfall and we only left after they had gone back too. 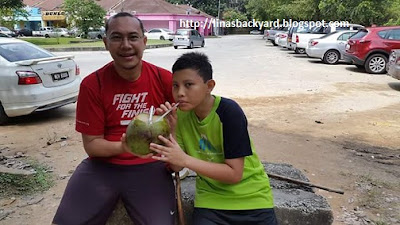 Of course a nice treat after a hike was enjoying some coconut water at the foot of the hill, both to refresh ourselves and replenish all the "garam" we lost sweating during our hike.
We'll be going for another hike/trip this end of month and sure are looking forward to it. :-)
Email Post
Labels: Close to my heart Gardens and Parks Out and About