I didn't join the Cyberjaya Twincity Marathon when it was held for the first time in Dec 2014. The second edition of Twincity Marathon was held on the 4th Sunday of January 2016 and I decided to enter the half marathon category to kick-start my training on getting a faster timing for my half-marathon. 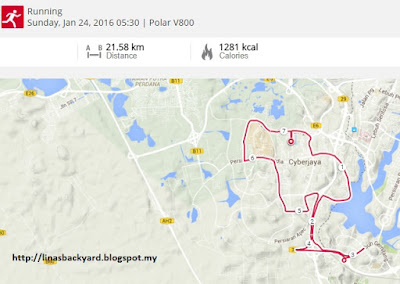 I followed Hal Higdon's 12-week plan for Twincity Half-marathon and although I was unable to 100% follow the training plan, the progress I made was encouraging. In the past 12-weeks, I managed to get a PB for my 10K and 12K so I was hopeful to break the 2:30 timing this time.

But then, I made a few mistakes while running the half-marathon.
Anyways, to make a long story and whining short, I didn't managed to do a sub2:30. Damn that extra 4 minutes! Hahaha

But instead of feeling down or disappointed, I realised all the silly mistakes that I made and  with a new training plan starting next week and with a new half-marathon race date to look forward to, I am looking forward to get that sub2:30. And have fun while doing it too.

On the race itself, apart from the fact there wasn't much to see along the route as we started running early at 5:30am, the race itself was good.
The full marathoners had more fun. They got to enjoy freshly made roti canai at one of the water station! Jeles!

The Twincity Marathon can be a tad tough for some, Mentally or physically. Mainly because of the humidity during the early hours and then the heat as the sun starts to appear. It can be a rather monotonous route too but in my opinion, it's still a good training route towards other marathons.
As I only did a half-marathon this time, I was able to wait for my friends who were doing the full marathons to finish and cheer them on. 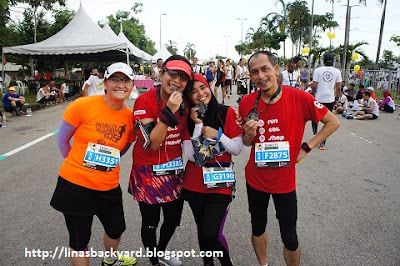 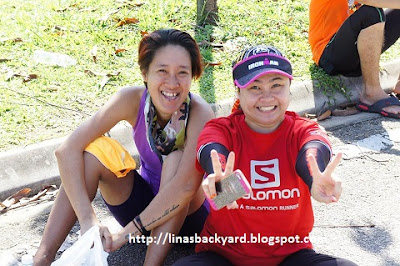 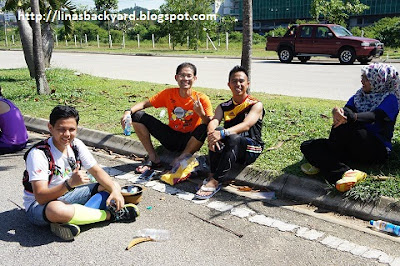 Waiting and cheering for full marathoners in front of the finish line. Under the hot sun. 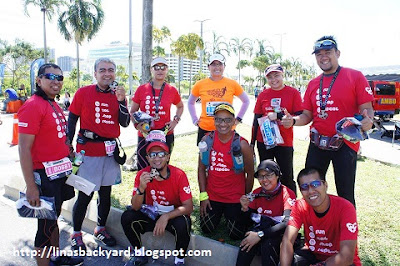 With the full marathon kakis. 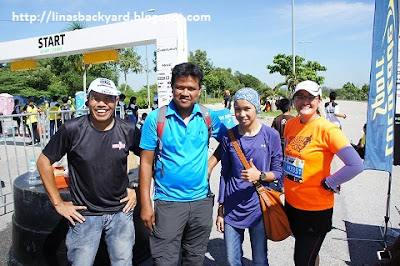 With the hardworking people behind Twincity Marathon.

A bonus for full marathon runners who were arriving after 7-hours, they had special treatment for their hardwork and tenacity for finishing the race.

Volunteers put on their medals at the finish line (faster runners had to queue up for our medals unless we're podium placing runners. Hahaha), the RDs served them drinks personally some more.... So nice.

There were special prizes for the last 5 runners who arrived (regardless whether they made it within cutoff time or not) as an encouragement to them.

A bit of drama happened at the finish line. The arch fell down as a sudden gust of wind blew. Luckily, there was no one under or nearby the arch that time.

But I guess for some runners, they might have felt a tad disappointed as they approached the finish line, thinking the organiser had taken down the arch. But of course, they were met with a row of volunteers clapping for them as the cross the finish line timing mat.

All in all, I had a good morning. I had my run. I met a lot of friends. And I did have fun.