Hatten Neon Nite Run On The Eve Of New Year

On the  eve of the new year, the family traveled to Melaka for a short trip and run. A nice treat for the Son before school opens on Monday. ^^

The three of us registered for the 3K Family Run in the Hatten Neon Nite Run held at Padang Dataran Pahlawan Melaka. We also had a room booked at Hatten Hotel, Melaka just right across the field where the Start Line was located so getting to the race was easy peasy. ^^ 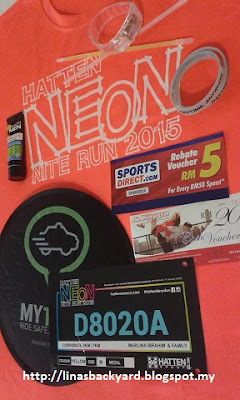 One of our race kit. We got our race kit sorted and then went out for dinner nearby before returning to our room later to change and walk down to the Start line. Love the convenience of having everything just a walk away this time. :-) 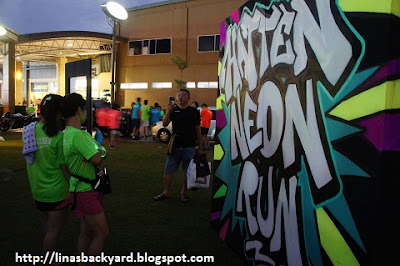 We only went down at 8.00pm and when we reached the field, zumba session was in full swing. Quite an energetic session that lasted more than 20 minutes too! 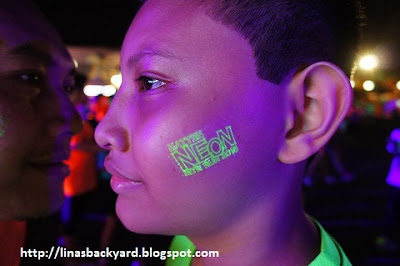 The atmosphere was great and it felt like we were attending a concert almost. Great positive energy all around with people excited to run on the last day of 2015 and also usher in the year of 2016.

We were provided with glow tattoo (like the one on Son's cheek), blinking wristbands, glow sticks and glow-in the dark event t-shits in our race kit, apart from our bibs. 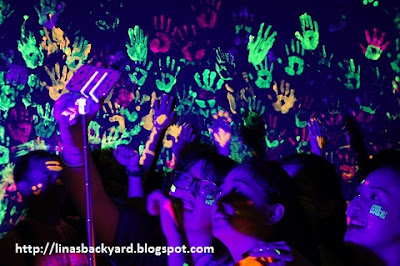 At the field, there were crews who helped runners put on glow paints to either place their palm marks on the photo wall or decorate themselves. 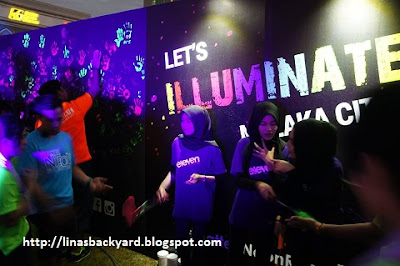 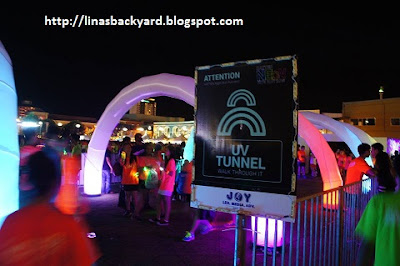 To get to the start line, we first passed this UV tunnel. I guess it was so fun that even non-runners and visitors to the field area got curious and went through it. 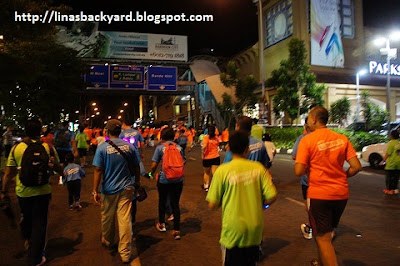 7K runners was flagged-off first and there was a massive crowd of them!

Those family who were slower were running with traffic beside them which look a bit worryingly dangerous.

Great job by the traffic police and marshalls though. They manned the junction marvelously and marshalls on motorbike frequently passed by to remind runners to keep to the left and be careful of vehicles passing by especially as quite a number of children were happily running fast, quite oblivious to any danger. Great job marshalls!

But if I may give a suggestion, perhaps the organiser of Hatten Neon Nite Run can consider coning off one side of the road to provide safety and also reminder for both passing vehicles and runners to be extra careful.

Also, perhaps have the emcee remind all the runners to be mindful of traffic before the flag-off because I didn't hear any reminder about runners' safety. Only reminder that they won't start the run if we don't line up properly. (It was just a fun run lah, for goodness sake Mr. Emcee). 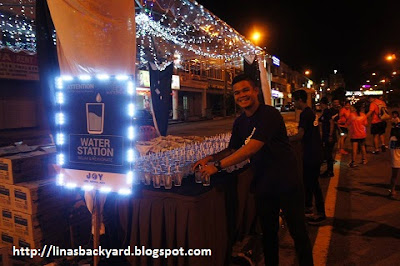 A water station was allocated just after the u-turn point for 3K, providing not only water but bananas too! Manned by extremely cheerful and friendly volunteers. I find all the volunteers of this run friendly. You guys are awesome! 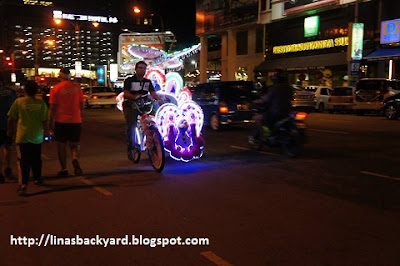 A few hundred metres towards the finish line, we passed Menara Taming Sari and saw a spectacle of another neon display. By the all the beca!

Here, I sped ahead leaving Son running with Hubby because I wanted to snap their finishing photo.

I actually ran with my Sony Nex camera this time because I wanted to take photos and didn't want to use my phone. 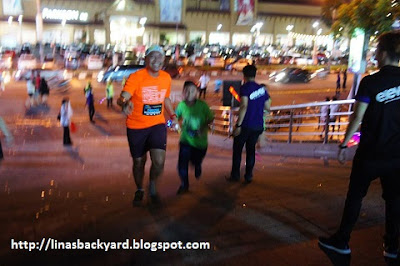 My two boys finishing their run. 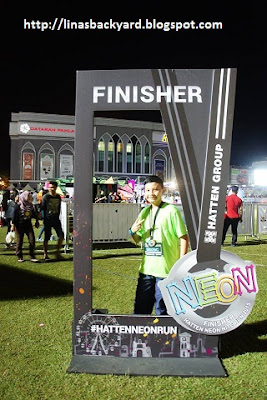 Congrats to Son for finishing another run.

His finishing time for a 3K has gotten slower now, so maybe Hubby and I need to train with him and enter him to more races in future. Hehehe

Regardless, we are proud of him. ^^