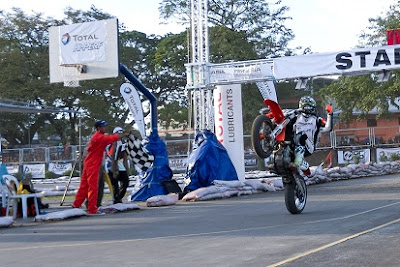 Watched on by 30,000 spectators, Andy McLiesh capitalised on his pole position to win Moto 1 and 2 in Round 3 of the FIM Asia Supermoto Championship.

The Australian had been riding steadily throughout the weekend, trailing Gabit in terms of lap times in the practice sessions before turning it up a notch to cement his grip on the pole position after Final Qualifying and Super Chrono sessions.

The Bayanihan Park Track had been laid out over a public recreational park and part of a taxi depot. The surfaces of the “tarmac” section were therefore rough concrete (the taxi stop part) and fine concrete on two basketball courts, punctuated by strips of grassy dividers. The “dirt” section on the other hand, was uncut grass. This made the entire track much more slippery than what the riders had faced previously. Besides that, although the track covered a large area, it became narrow with many sharp corners thrown in (no straights).

Thus, in the face of a narrow, twisty, and slippery track, that Number One starting slot became the most coveted piece of real estate. The final starting positions were only determined after the dust had settled in the Super Chrono session (a shootout between the fastest six riders from the first qualifying). So fierce was the competition that the top five qualifiers: McLiesh, Dibben, Gaban, Gabit and Matsumoto were separated by less than a second.

The start of Moto 1 was delayed just as the riders were completing their sighting lap. A rider had gone down and spilled engine oil onto the track, prompting the track marshals to mobilize the cleanup crew.

When the grid formed up for the restart, it was Richard Dibben was missing. His the front tyre had apparently washed out under him and in a freak occurrence, the gear pedal punctured the engine’s timing case. “We had sat at the track entrance and grid for too long and the tyres had cooled. I was weaving the bike around to heat them up when the front just tucked under,” lamented Dibben. The team tried to patch the crack with putty but it didn’t dry in time for Moto 2.

McLiesh grabbed the lead past the first turn, leaving his rivals to battle it out amongst themselves in his wake. He did not look back from the on and kept building on his lead to an unassailable gap.

Behind him, a brutal battle for 2nd developed as Mohd. Al-Amirul Ashshahid (Gaban) was determined to defend his 2nd-placed starting spot from his brother Muhd. Habibullah (Gabit) who attacked him incessantly, who was in turn being hounded by Takashi Sasaki. Gaban’s defensive lines caused his lap times to slow and delay the group, consequently allowing McLiesh to disappear at the front altogether.

Gabit finally found a way past Gaban when the latter almost highsided on lap 14. Gabit then put in a series of blistering laps to close the gap to 6.221s at the finish line.

Gaban managed to hold on to 3rd by keeping Sasaki at bay.

5th- and 6th-place qualifiers Yasushi Matsumoto and Khairi Zakaria also found themselves stuck behind another rider from the start, before finally Matsumoto forced his way through on the same lap 14. The move also opened the door for Khairi to follow through.

Matsumoto then put the hammer down and was soon on the tail of Sasaki, who was still trying to find a way past Gaban. This triggered another round of battle for 3rd, as Sasaki attacked Gaban in front of him in order to get away from Matsumoto. The three riders even touched a few times but it ended in a status quo of Gaban, Sasaki and Matsumoto in 3rd, 4th and 5th respectively. Khairi Zakaria rounded off the top 6.

Gabit had hoped that starting in 2nd (following his Moto 1 finishing position) would allow him to claim the holeshot at the start of Moto 2 but McLiesh held his ground.

The second race was a race of sorts: Sweet spoils for the victor but cases of bad luck and even heartache for the rest.

The riders had raised concerns about the soft and untethered sandbags from the start. To most, their instincts came true.
Gabit and Matsumoto had pressured McLiesh from the start, keeping the former in sight. With those two fast guys breathing down his neck, McLiesh made an uncharacteristic error by going too deep into Turn One, causing his inside footpeg to snag a bag and dragging it onto the middle of the track. Gabit and Matsumoto had to slow to avoid running into the hazard, allowing McLiesh to once again open up a gap.

But the two riders didn’t let up and soon closed the gap to McLiesh in 3 laps. Again, a sandbag ended up in the middle of the track forcing the pursuing pair to back off. Slower riders then came into play and given the tight nature of the track, overtaking was a risky affair. Gabit and Matsumoto had lost touch of McLiesh, this time for good.

This left Matsumoto to mount a serious challenge for 2nd. Alas it was not to be as it was Matsumoto’s turn to snag a bag, almost causing him to crash, leaving Gabit to open up a substantial gap.

3rd-place finisher in Moto 1, Gaban had a heartbreaking second race as he first crashed heavily when his bike caught a bag, then again but he managed to stay up this time. He was glassy eyed in the pits after the race. “We tried pushing hard in both races but the results were not to be. I couldn’t push any harder as the bike was fighting back,” he said.

The heartaches did not stop there as Khairi was deemed to have used an “unauthorized route” (cutting a corner and earning unfair advantage) by the course marshals and was consequently dropped a position, handing 5th to Gaban.

Sun Tong and Hasroy Osman were handed 10-seconds penalties to their total time for ignoring 3 consequent blue flags. Blue fags are waved when a leading rider is coming up behind to overtake. Not yielding means one is blocking the progress of the leading rider(s).

“It was really hot today, sitting a long time on the start line in leathers. It was really hard,” said McLiesh in the post-race interview. “We got away to a great start in Race 1. Our strategy was knowing Gabit will get held up by Gaban. In Race 2 I just wanted to put the hammer down, build up a massive lead, because Gabit isn’t going to let up at all throughout the race. To come here after lots of bad luck previously and win both Motos was what we wanted.”

“I’m really pleased with my results today, having come in 2nd in both races. Find the right tyre combination to handle the slippery grass section was difficult, so I had opted for the rain tyre for the front. That tyre was too soft, however, so it was worn out by Moto 2,” explained Gabit. “All I could do at the end was to maintain my position and not crash, because my target is the not only the Asian Class but the Open International Class. I wanted to catch Andy (McLiesh) but it was too dangerous. Apart from that, the backmarkers had backed up tremendously due to the narrow track, so I couldn’t find a way through quick enough.”

Yasushi Matsumoto had been the revelation of the weekend. The Japanese Flat Track Champion impressed everyone by finishing 3rd overall in his first ever outing. “I’m very happy for my results. It’s because my team, Team KYT had been superb in their support. Also, thanks to Technix Suspension. Their chairman actually made the trip here just to personally setup my bike.” He continued, “Yes, it was challenging out there, but finishing with this result is good. I’m very happy.”

The 2016 FIM Asia Supermoto Championship heads to Malaysia for the fourth and final round from 16th to 18th December. 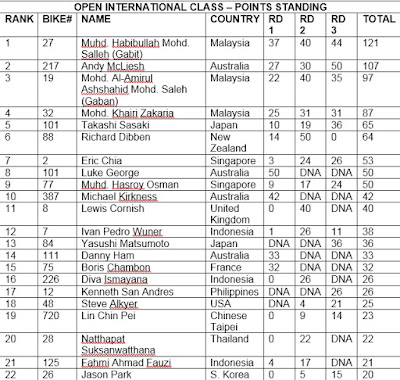 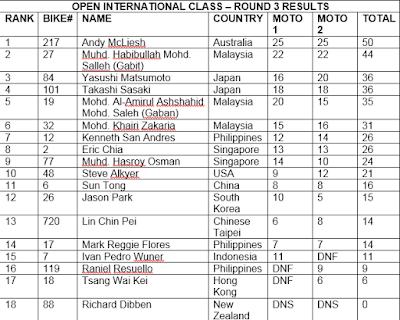 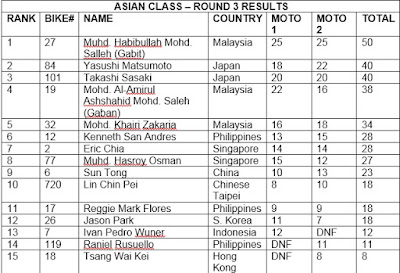 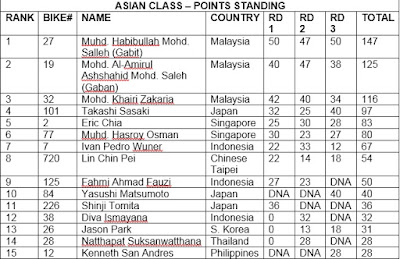