Hiking Up To Mount Jinba, Japan

Hubby and I had planned for another "half-marathon" the day after I ran in Chiba Aqualine Marathon which I did on Oct 23, 2016.
But the half-marathon wasn't done in a running event but rather a hike up to Mount Jimba via Mount Takao's Inariyama Trail.
We visited Mount Takao a couple of days before I ran in Fujisan Marathon back in 2015 (blog posts here and here) and we wanted to do the whole hike up to Mount Jinba this time. 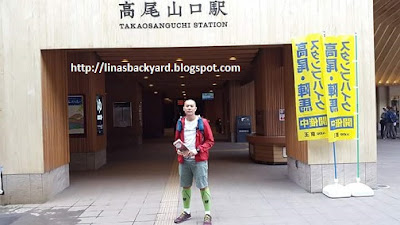 Early Monday morning, squished in the train with office workers commuting to work; we started our hike from Takaosanguchi Station. Despite it being a Monday, there were quite a number of hikers seen at the station.
The station was in upgrading phase when we were there in 2015 and the upgrading works were all finished during our recent visit. 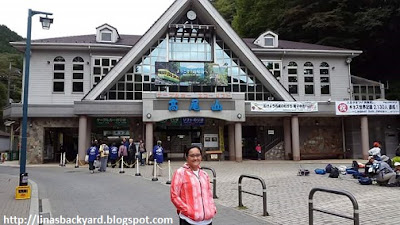 A few hundred metres from the train station is the cable car station.

Non-hikers can opt to take the cable car and just walk a few hundred metres to get to the top of Mount Takao instead.

There were a numbers of trails for those who chose to hike up, ranging from very easy to moderate. Nothing too strenuous though and all the trails are well-maintained. 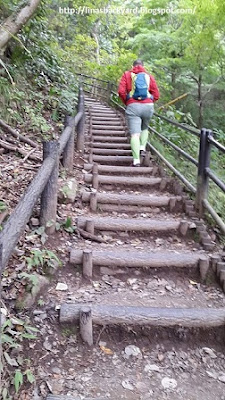 We chose to start from the Inariyama Trail this time and immediately faced a whole lot of stairs at the start of the trailhead.
The trail is a mixture of narrow stairs and broad, gentle slopes. 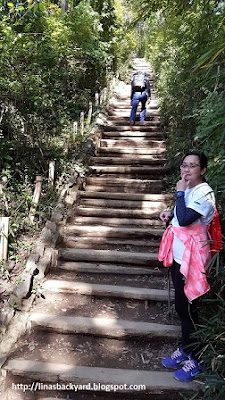 The 200+ final steps leading up to the peak of Mount Takao. Short but steep but with both a great view and a gaggle of a crowd waiting for us. ^^
The trail here can be quite bumpy as it is littered with jagged stones and also protruding tree roots.
Along the route is the peak of Mount Inari at 396m above sea level. 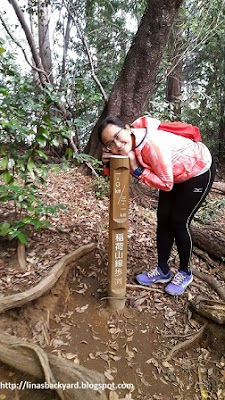 Distance marker in form of this wooden markers are available along the route but it's written in Japanese style numbering. Here I was at KM1 point of the 3.1km Inariyama Trail up to Mount Takao. 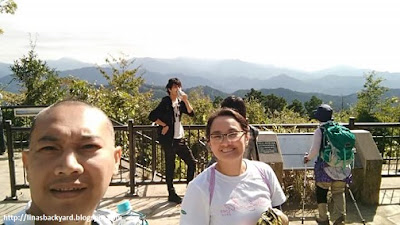 A leisurely 86 minutes hike later with plenty of photo stops, we made it to the top of Mount Takao (599m).
On a good day, one can view Mount Fuji from here.
We didn't linger long here as we decided to continue our journey to Mount Jinba and escape the crowd of Mount Takao. 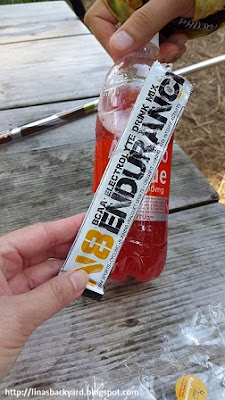 We continued our hike, heading to the Kobotoke-Shiroyama peak next (670m) but stopped at a rest area along the route. Away from Mount Takao, the number of visitors/hikers had lessen and those we saw were hikers planning on going on a longer route (with poles and backpacks) and trail runners doing their training run.
We had a snack and I mixed my N8 Endurance drink in a bottle of mineral water to drink along the hike. 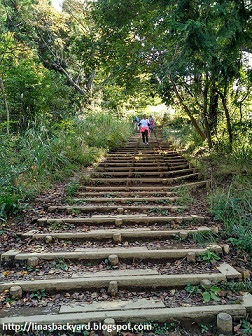 I don't mind the stairs if its an ascent but I hate descending on a route filled with stairs!
I could go up quickly but found myself struggling on the downhill because of my creaky knees. I would lead a few time while going uphill but Hubby would definitely caught up with me and took lead whenever we were descending. 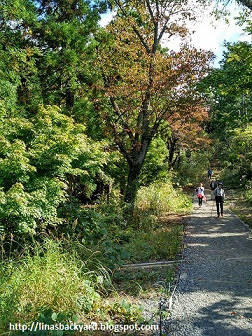 The route towards Mount Shiro was a mixture of wooden enforced stairs, gravel path and dirt path. 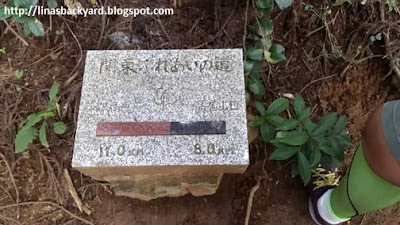 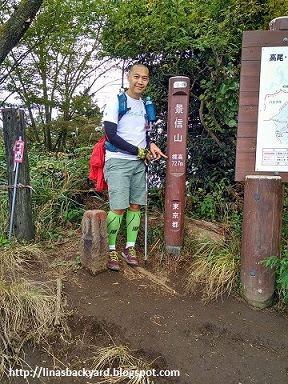 A few hours later, we reached Mount Kagenobu's peak (727m).
At each peak, there were a few rest stop areas with shops but not all were open so it is advisable to bring enough food and water to last through the whole hike. 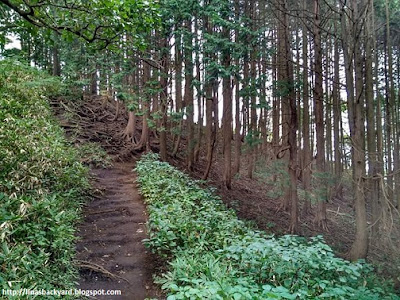 Most of the route was shady and it would've been a magnificent sight to behold once autumn colour sets in.
The only hot part was a clearing at the last 5km towards Mount Jinba because the trees were cut-off for timber.
By now we had pass through a number of peaks, although they are called mountains; they are not really all that high and not at all difficult to attempt. However, semblance of fitness is advisable before the hike so you don't suffer that much especially when tackling what seemingly feels like an endless numbers of stairs. Heh heh
The peaks that we passed through:
1. Mount Inari (396m)
2. Mount Takao (599m)
3. Mount Shiro (670m)
4. Mount Kagenobu (727m)
5. Mount Jinba (857m) 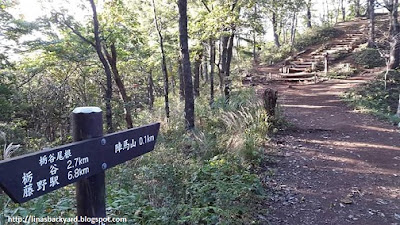 The final so-called 100m towards the peak of Mount Jinba and as with all the other peaks we got through earlier... STAIRS 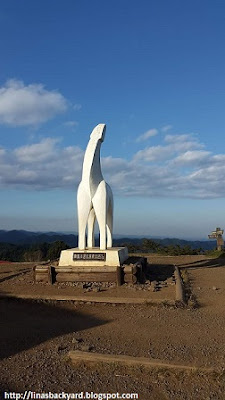 And we were greeted by Mount Jinba's 3m high white horse. This concrete white horse statues was erected in 1969 by Hachioji Tourist Association, courtesy of Keio Railways.
The view here is simply breath-taking and one is able to have a 360 degrees view of the surrounding mountains. 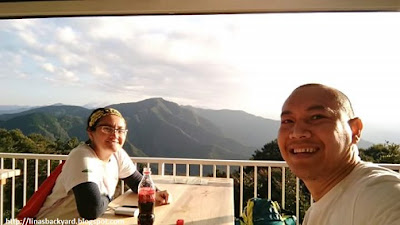 We started our hike at 9.30am from Takaosanguchi Station and it took us about 6hours to reach to the peak of Mount Jinba, with a leisurely pace. It was almost 4pm when we got to the peak and we had thought that the soba shops on the peak would be closed by the time we got there.
We were lucky one was still open (although in the process of closing) and the shop owner kindly accepted our orders. 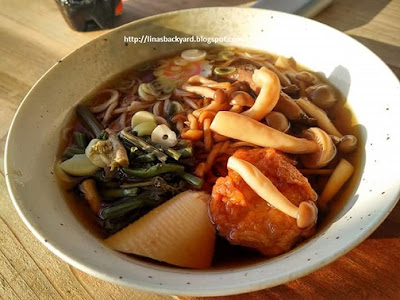 One of the highlights of getting up to Mount Jinba is in fact eating soba.
And boy, what a yummy soba it was.
A bowl full of soba with generous serving of wild ferns, mushrooms, bamboo shoots and fish cakes and all for only 600yen. 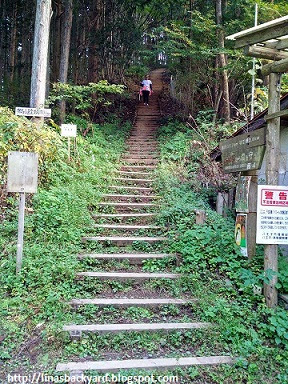 Our descent was via a shorter route, a mere 4.4km towards the bus station at Jinbakogenshita. It was after 4pm when we started our descent and we needed to hurry. We had been reminded by a nice elderly hiker to ensure we finished our hike before 5pm as it would be pitch dark by then. So we ran downhill using the road stretch and opted out of the trails. But we stopped a few times to look and admire a few waterfalls. Hehe
There was no traffic when we ran down except a lone car, a guy cycling up and later down and a man walking, seemingly checking the route. ﻿ 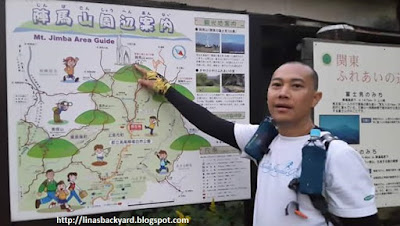 We arrived the bus stop 25 minutes before the bus scheduled to depart from the bus-stop.
There are of course easier ways to go up Mount Jinba, one of which is to take a bus from Takao Station to Jinbakogenshita and just do a short 5K hike before going down again.
Quite a number of hikers we met along the way did the reverse route i.e. Mount Jinba - Mount Takao.
We had wanted to use the loooonger way up hence the decision to do the Inariyama Trail to Mount Takao before heading up to Mount Jinba.
Our hike up took about 6hours and total hike until we reached the bus stop was 8hours (inclusive of resting and makan soba time at the peak).
From Jinbakogenshita bus stop, it was about a 10km bus ride that cost 560yen.
Mount Takao and Mount Jinba are two great places to visit if you want to hike that is not too far out of Central Tokyo as it is only a 50 minutes from Shinjuku Station. But due to its close vicinity, expect crowds at the peak especially Mount Takao.
There will be a trail race held on the Mount Jinba this Sunday so expect a busier crowd there if you plan to head there this weekend.
﻿
Email Post
Labels: Close to my heart Itchy Feet Makan Time Out and About Travel - Japan Vacation