ANGELES CITY, PHILIPPINES, 18 NOVEMBER 2016 – The FIM Asia Supermoto Championship created history last month when the race became the very first international Supermoto event to step foot onto Indonesian soil. This weekend, history in the motorsport is about to be made again as Round 3 of the Championship makes its way into the Philippines which will also host its first ever international Supermoto race. From the picturesque Foreshore Park of Newcastle, Australia to the spirited Kanjuruhan Stadium of Malang, Indonesia; Asia’s best Supermoto riders will convene again for the third time this year at Bayanihan Park in Angeles City to have another go at the podium and hunt for this year’s championship crown.

Known as the entertainment capital of Central Luzon, Angeles City is a highly urbanised city located 80 kilometres north of Manila in the province of Pampanga. Once home to one of the largest United States Air Force Base, Angeles City is now a tourism hub which proudly boasts a wide array of historical sites and a bustling nightlife with many restaurants, bars, disco clubs and shopping outlets. One of the many attractions in the city is Bayanihan Park, a recreational park equipped with various sports facilities. Located right in the heart of the city, the park has hosted numerous festivals, carnivals and other events. It is also home to the city’s most significant and monumental landmark, the ‘Salakot Arch’. 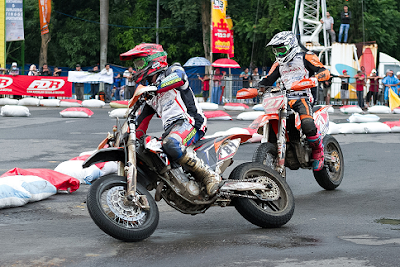 With just hours away from the race, and our riders are making all the final adjustments and tune-ups as they prepare for yet another heated battle. On this weekend’s roster, we have 14 riders contending in the Asian Class and a total of 17 riders in the run for the Open International Class. Just as each track from the previous rounds of the championship had posted its set of challenges, so will this weekend’s track.

This round’s track is notably narrower with plenty of sharp corners. Spectators’ heart will skip a bit should a close competition occur at the tight hairpin on the 250 meters long off-road, which is also expected to be a crowd favourite area. While the 750 meters tarmac may seem a less challenging compared to the off-road, riders will have to race hard for the top leaderboard spot under the tight circuit across countless corners before the real challenge on dirt. Muhd Habibullah (aka Gabit), the current overall leader for both the Asian and Open International classes, believes that securing a stable position on the starting grid during the Qualifying round will be crucial for success. “The track is very narrow despite spanning over a large area. The dirt section is also covered in grass and will be very slippery. Therefore, I expect everyone to put up a fight during the qualifying round really,” says the KTM Malaysia rider. Given the track conditions, riders will find it difficult to overtake each other during the race, thus having a good starting position will be a huge determining factor.

Round 3 of the FIM Asia Supermoto Championship will commence this Saturday, November 19th. Join us at Bayanihan Park and be a part of a historical Supermoto event!