The week of Nov 7th - 13th was the third week into my 12-weeks marathon training program with the aim to do a full marathon at Twincity Marathon on Jan 15th, 2017.

The first week's long run saw me doing 15K at Score Run on Oct 30th just a week after Chiba Aqualine  Marathon where I did a half-marathon and I did a  2-hour run last Sunday at home.

Thanks to The Marathon Company, an event management company which had handled races such as Ice Watch Light Up The Night Run 2015 (and the upcoming one in Dec too), Run Stroller Run, BOH Eco Trail Run and more recently; Ariani Hijab Run; I entered Putrajaya Night Marathon 2016 wearing their team t-shirt.

Thank you for trusting me despite my not so great running. ^^ 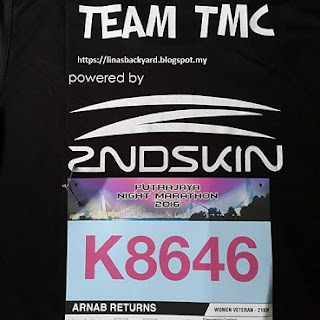 There was no target time to finish this half-marathon (although another sub2:30 HM would've been nice) but rather, I wanted to run at a controlled effort. I made a conscious decision not to look at my Polar GPS watch to check my pace or 3K splits. All I wanted to do that night was to run with an effort that I could foresee to carry for my full marathon.

The start of the run didn't look too good. It had started raining in the evening and it was still drizzling by the time the full marathoners were flagged-off at 8.00pm.

Thankfully, the rain subsided by the time we, the half-marathoners were flagged off. I started with a couple of friends but they soon left me to eat their dust. Hahaha

Route wise, it's pretty much standard Putrajaya route and quite similar to TM Fan Run route. Nothing much to see along the route, scenery wise (though one can enjoy the night lakeside lights at certain stretches) but the organiser had thoughtfully put up a few entertainments along the route.

There was a lion dance troupe, music and even super-heroes waiting for us. Oh! Pikachu made an appearance too, alongside Ironman and Ultraman! 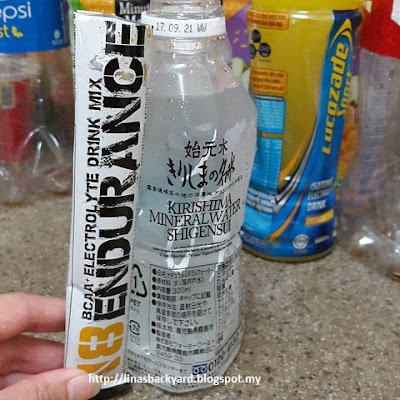 I skipped dinner before the run and only munched two Moolabars while queuing to stash my stuff at the luggage counter. And I brought along my N8 Endurance drink mix to drink while running.

Taking N8 Endurance drink meant I did not need to take any gels during the run and I also stopped less at water stations and avoid the congested ones.

I bumped into a few running friends along the route but for most part, I was running alone. 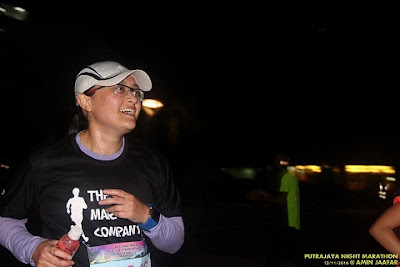 Heading towards the finish line. Thank you Amin for the photo. 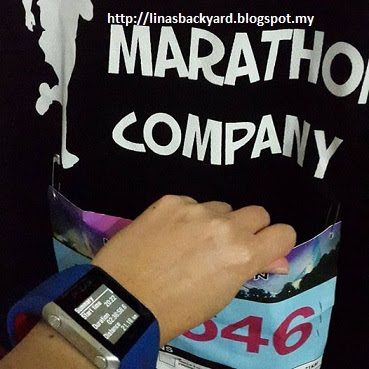 I started my run almost 3 minutes after the flag-off and it took me 2:40 (gun time) to complete my run.

A 3-weeks injury time in Sept and Oct sure affected me quite a lot and I need to work on my speed again. 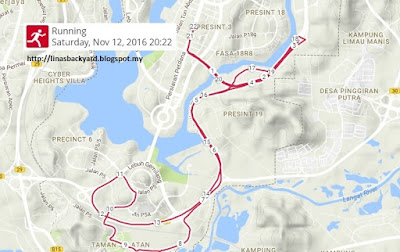 It was also pretty much a touch & go race day for me as Hubby was out of town and Son was at home.

I ran and immediately head back. I needed to head home early as I had SJMC Run to go to on Sunday morning and also the fact that I had no one to drive me back after the run.

Thank goodness it was easy to get Uber/Grabcar service to/from Putrajaya on weekends!

Next weekend will see a bump in the long run mileage as I need to do a 27K and I need to do it on Saturday as I have a short relay race on Sunday.
Email Post
Labels: Itchy Feet Race Recap